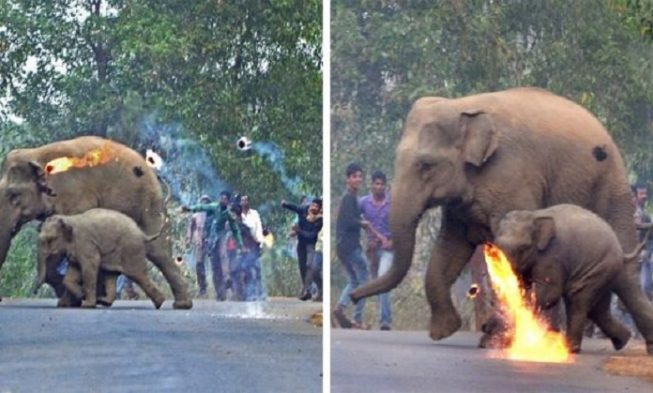 Because of deforestation in India, many elephants can be found traveling around communities and villages.

Many animals in India have been left no choice but to encroach on human habitats in order to find shelter and food. They eventually end up walking through villages or crop fields in  desperation to find somewhere they can fit in and make a new home.

However, in order to protect their properties and crops, people go to extreme ways in order to stop these animals from coming.

Photos have emerged from the moment when residents of Bishnupur started launching firebombs at an elephant and her child in order to stop them from coming into their crops. The animals start panicking and began running across the road in terror.

Most of the times, the villagers burn torches and wave them at the elephants in order to chase them away.

There have been many young people that are taking pictures of the elephants and record such terrifying incidents. There have been photos showing the mother elephant and her calf trying to navigate the railway tracks which were built through their natural habitat.

Some of these heartbreaking images were done by the photographer Biplab Hazra. His goal is to raise the awareness of the state that the elephants are in because of their endangered habitat.

“The images highlight the extraordinary level of violence the endangered species faces as they try to survive in smaller, more fragmented habitats. Herds of elephants can cause significant damage to crops, impacting people’s livelihoods. Some farmers use flaming torches to frighten elephants away from inhabited areas.”

Some of these images show the angered elephants chasing down the people across their farmlands.

Elephants usually spend nearly 19 hours a day feeding, which makes them produce about 220 pounds of manure a day. Even though villagers tend to chase them away, the manure is very important for them in order to fertilize their crops and maintain the integrity of grasslands and forests.

This serious issue needs to be dealt with in the right way as soon as possible since the number of Indian elephants has decreased drastically in the past couple of decades.