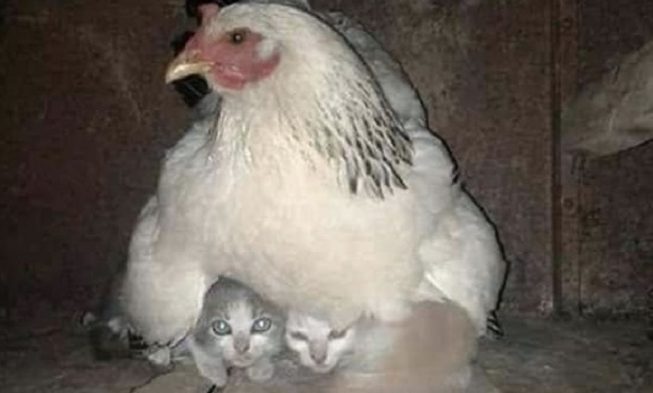 Women are amazing when it comes to taking care of their babies. Mothers are so caring, loving and ready to do anything for their little ones. But this does not apply only to humans. It’s true about all the mothers of the animal kingdom.

But what people might not know, is that hens are willing to adopt other animals as well. The chicken industry makes us believe that chicken are pretty dumb and unfeeling animals.

However, there’s been a picture that’s been going viral these days and it features a compassionate chicken, who appears to be determined to keep scared kittens safe and warm during a storm. And pictures like this one are proving that these birds are as intelligent and loving as many humans.

A description of the photo

The origin of the photo has been unknown and it was quite popular over the Internet for at least four years. But now, it’s making its rounds once again. Some people believe that someone may have captured it during a snow storm, whereas some other think that it happened during a thunder storm.

No matter the weather circumstances under which it was taken, the point is that the two little kittens appear to be really cozy and grateful for the comfort this hen is providing for them. Their feathered friend is certainly keeping them warm in that cold weather outside. As for the hen, it seems to be quite content for mothering them. Even though she is probably aware that when they grow up, they could easily kill her.