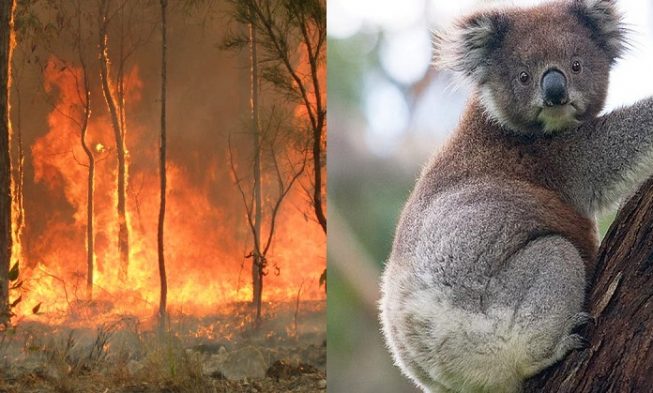 The fire season in Australia began in late July 2019 and it is being ravaged by the worst wildfires seen in decades.

According to CNN, on 8 January 2020, a total of 24 people have died nationwide, and in the state of New South Wales (NSW) alone, more than 2,000 homes have been damaged or destroyed.

The fires have been aggravated by persistent heat and drought, and many points to climate change as a factor making natural disasters go from bad to worse.

The estimation of the wildlife experts is that nearly half-billion animals have died in the bushfires. Professor Chris Dickman from the University of Sydney, on January the 3rd, has estimated that roughly 480 million animals have been killed in the fires since September 2019. According to the Times In that figure are included mammals, reptiles, and birds, which have been killed directly or indirectly by the fires.

The ABC published the statement of the federal environment minister Sussan Ley, who told that up to 30 percent of the wildlife in New South Wales may have been killed. The basis for this estimation is that roughly 30 percent of the habitat of the animals was destroyed.

Ley said:  “We’ll know more when the fires have calmed down and a proper assessment can be made.”

Although heavy rains last week helped emergency services in some areas, more than 100 fires are still burning across the country. It is estimated that over five million hectares of land have been burned so far, of which four million have been in New South Wales.

In addition to endangering human and animal life and destroying infrastructure and natural resources, fires also affect air quality in much of Australia. So now in southwestern Sydney, air quality has been declared dangerous.

Although the number of animals and plants dying in fires is too high, Australian officials warn that the worst is yet to come

More than half a billion animals and plants die in fires as Australian officials warn the worst is yet to come pic.twitter.com/QyuLIq6fxY

Truth Theory reports last month that fires in New South Wales caused the removal of all koalas in the region that were already experiencing a dangerously low population level.

Even according to preliminary indicators from WWF Australia and the Nature Conservation Council (NCC) report released last year, koalas in New South Wales, due to deforestation, were already on their way to extinction, and now they are in a more difficult position.

Using NSW satellite imagery, it can be seen that the amount of deforestation in the region has almost tripled, from 2,845 hectares to 8,194 hectares between 2017 and 2018.

Expectations were that the koalas would be wiped out of the region by 2050 if this trend continued, but these unprecedented fires pose much more immediate problems. There is a real chance that the last remaining koala in the region could be lost in this year’s fires.