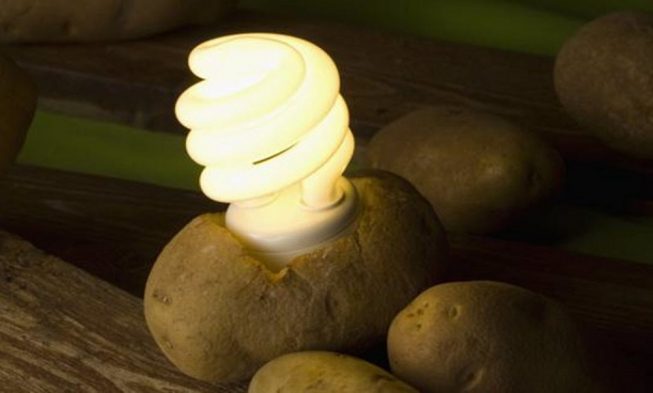 Everybody has a different preference when it comes to potatoes. Some people like them mashed, others boiled and some fried. However, there’s this scientist Haim Rabinowitch likes them “hacked”.

Since there are people who are cut off from electricity grids, this scientist and his colleagues have been pushing the idea of “potato power” as a solution to their problem. If pursued, their idea would deliver energy to these people. Rabinowitch and his colleagues argue that if you hook up a spud to a couple of cheap metal plates, wires and LED bulbs, it would be able to provide energy to remote towns and villages, no matter their location.

Rabinowitch, from the Hbrew University of Jerusalem, stated that the simple trick they’ve discovered could make a potato able to power enough LED lamps for a room for forty days.

However, he made it clear that the spud does not generate energy. It’s rather the acid in it that creates chemical reaction between the anode and cathode. Thus, the electrons release energy when they connect through the potato.

Even though potatoes are preferred when it comes to teaching these principles in high school science classes, no one really thought of studying them as energy source before. So that’s why back in 2010, Rabinowitch got the idea to give it a try. Rabinowitch, together with Boris Runinsky from the University of California, Barkeley, found out that by boiling the potatoes for eight minutes, it broke down the organic tissues inside them.

Thus, reducing resistance and making the movement of electrons freer – leading towards producing more energy. They tried to increase the energy output by slicing the potato into four or five pieces. Each of them was sandwiched by a copper and zinc plate, so as to make a series. They found that they were able to improve the output 10 times. And economically speaking, it was a great advantage, because that way the cost of energy will drop down.

Rabinowitch pointed out that the little experiment they did produces low voltage energy, but still, it’s enough to make a battery that could charge mobile phones or laptops in places where there is no power connection. Plus, it’s way cheaper than a typical battery. As it was said earlier, it can produce energy to power LED lamps for 40 days, and that’d be like six times cheaper than the common kerosene lamps. On top of that, potatoes are cheap and store easily.

Anyways, for now Raninowitch’s prototype is not really popular among people, or investors for that matter. Alternative energy is taking the more fashionable forms of solar and wind power. But still, it’s a great discovery and one day people might get used to it.