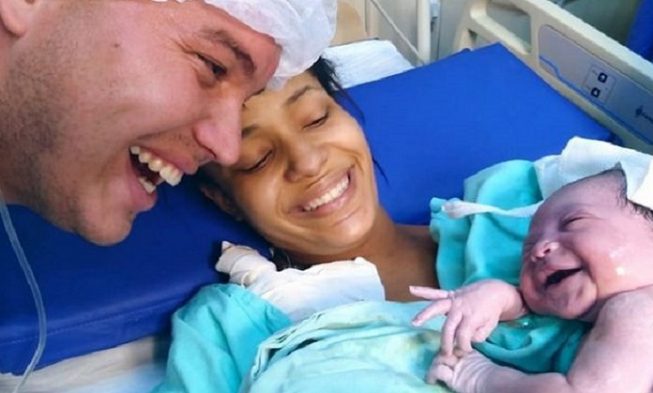 A couple that expects the baby don’t need to wait until their baby is born to bond with them. They can start forming an attachment with the baby during pregnancy, which is very important for his/her development once he/she has actually arrived.

Now we will tell you a story about the heartwarming result of the father’s bond with his unborn baby. Like many fathers, Flávio Dantas, of Rio de Janeiro, Brazil, was more than excited to be a father. He had shown his happiness every day until his daughter was born, by speaking to his unborn baby. He was not aware of how much his efforts would reward him.

Every morning, before his partner, Tarsila Batista went to work shared with Flávio moment allowing him to speak. While stroking her growing belly he would say “I’ll always be there.” They saw the reactions of the unborn daughter every time – she would start to kick and move.

The baby Antonella was born at Marcílio Dias Naval Hospital in Rio de Janeiro. She had the most suitable response to hearing her dad’s beloved voice for the first time when the medical team handed her to the parents. She was sleeping while Flávio leaned in close to say “hello”, repeating the same words he had told his daughter throughout Tarsila’s pregnancy. This time, Antonella responded by opening her eyes and giving the biggest smile.

This life experience overwhelmed Flávio and he couldn’t describe his love for his baby daughter. He said that this love was “too big to fit inside his chest.”

Since babies can process sounds starting as soon as 16 weeks after conception, Antonella had quite a bit of time to get used to her father’s voice. After 26 weeks during pregnancy, unborn babies will noticeably react to noises from the outside.

Antonella was also born on August 11th, 2019, which is Father’s Day in Brazil and that enhances the sign of the strong bond between two of them.

This day and date will be the moment that Flávio will remember for the rest of his life.