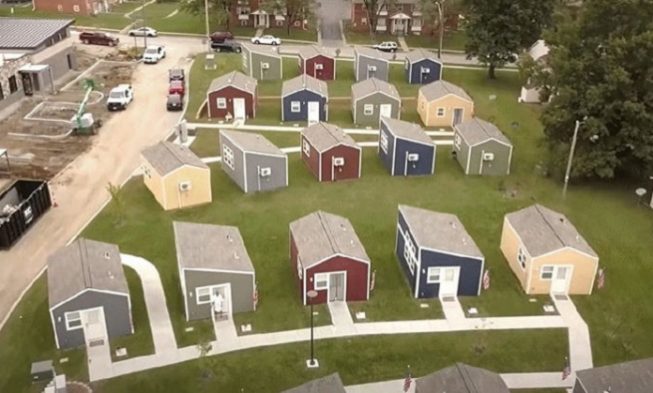 The United States has always been a country that’s proud of its war veterans. However, despite their pride, the country has left a shocking number of men and women homeless after they finished their service. About 40,000 homeless American veterans are located across the U.S.

One nonprofit organization called The Veteran’s Community Project (VCP) from Kansas City, Missouri plans on helping these homeless veterans. They have built a village filled with tiny homes for homeless veterans. Each veteran will get a transitional home and have a community center to help them get back on their feet.

Byran Meyer is the CEO and co-founder of the VCP and has served the army in the US Marines, deployed twice in Iraq. Along with his fellow veterans Brandon Mixon, Mark Solomon, and Vincent Morales, they co-founded the VCP in 2016. These four men went out in Kansas City and talked to veterans on the street, trying to figure out why they stay on the street instead of a shelter or another transitional living facility. These places lacked a sense of security, privacy, and the ability to rebuild at the veterans’ pace. To make things better for the veterans, they decided to build the village of transitional homes and provide the veterans with the options they lacked.

The village is five acres big with 49 tiny homes in it and it was purchased by the VCP for $500. It was completed in 2019 and each home range from 240 to 320 square feet in size. They resemble military barracks which are familiar to the veterans.

There’s also a 5,000 square foot community center in the village that offers many services to the veterans such as mentoring, counseling, case management, medical facility, dental facility, veterinary clinic, as well as training and commercial kitchen.

With young and old veterans coming to this village (24-84 years old) the usual stay is less than one year (around 275 days).

The VCP is thankful for the people being able to give them the help and funds since 100% of their funding is through donations.

After hearing of the success of the village in Kansas City, more cities around the U.S. have contacted VCP and want them to help build a village in their community.

On a single night in January 2019, about 37,000 veterans were homeless. This is a 2.1% increase since January 2018. With such an increasing rate, something must be done to help these people, especially since they served their country. Out of all these veterans, about 22,000 were sheltered while 14,000 were left on the streets.