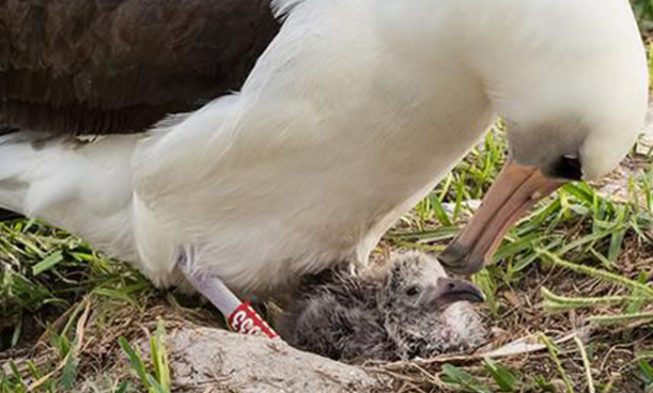 Wisdom the albatross, is definitely pushing the boundaries of what we thought birds are able to do.

This bird has survived tsunamis and outlived most of her mates. But the most incredible thing it’s done, is that it has raised over 40 chicks!

Wisdom is already popular among scientists and they know many things about her. First, she was banded in 1956, as part of a long-term research project. The project has identified more than 260,000 albatross since the late 1930s.

Scientists know her most favored nesting spot. Last November, she laid an egg and it hatched into a fluffy chick on February 1. She has done it at least eight out of the past eleven years.

Things scientists have still not discovered about Wisdom

But still, there are some things that have remained unknown to scientists. One of the things that’s been bothering them is the question of their lifetime.

Plissner stated that scientists have no idea about how long these birds live and whether this one is an exception from her species. This particular bird could just be the oldest one that they are familiar with. They are also not certain about the number of chicks she has raised. According to Beth Flint who is a biologist at Marine National Monuments, they strongly believe that she’s raised at least 35, based on the information they already know about her.

Flint explains that Akeakamai and Wisdom’s arrival at her nest side on Midway Atoll brings joy and happiness to researchers like him. It’s like that because with her come back every year, they see a chance to dig deeper into the research regarding how long the seabirds can live and raise chicks too.

Once she hatches the chick, she and the Akeakamai take turn at the nest so as to make their new chick strong enough to head put to sea by summertime. They help each other with the food too. While one of them is busy at the nest, the other one is traversing the ocean in search for food.

Since albatross only lay eggs once in a year, every single chick means a lot for the growing population of the species. And since Wisdom is still laying eggs at her age, she’s probably a rockstar for her species. Flint adds that Wisdom’s a valuable symbol for conservation because of her annual arrival and growing notoriety.