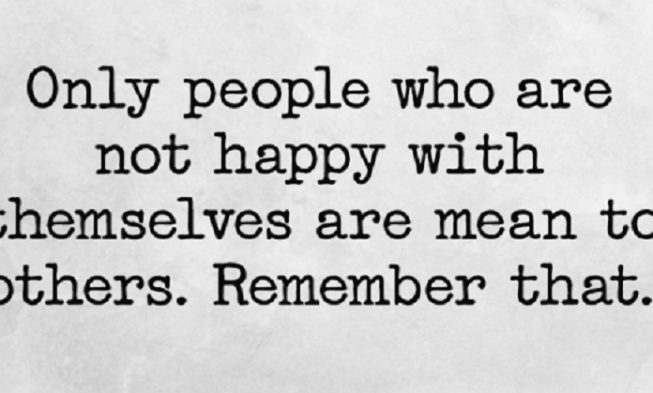 Because their self-esteem is low, they will try to lower yours

If a person has very low self-esteem and is hanging out with happy people, it’s pretty hard for them. When they see someone doing much better than them in life while they’re at the lowest point will increase their pain. Those people feel very threatened, insecure, and inferior toward others. The feeling is somewhat to being a poor person and seeing someone spend tons of money on things that are not essential. Even though it is never your fault for their economic condition, they will still hate you for your success. Those situations usually lead to the person unable to control their emotions and make mean comments toward others. The same thing happens to people with low self-esteem. With the mean comments that they make toward you, they’ll increase their self-esteem while your lowers.

Everyone needs to feel as miserable as they feel

Their negativity and feelings of unhappiness and miserableness will be transferred towards others around them. They will make people around them unhappy just so they will feel a little content. Just as the happy person spreads joy around them, these people spread negative energy and make people unhappy.

Negative people only sense the negative aspects of others

Even though these people are unhappy with themselves, they tend to never see the positivity around them. All they can sense is the negative aspects of any situation and any person, even themselves. When you finally get a girlfriend, these people will tell you that she’s either fat, ugly, or cheating on you, even though they have never met them. If you get a job or find an interesting idea of opening your own business, they will tell you millions of reasons why your idea or job success is bad for you.

Everyone around them is part of their revenge plan

These people usually take revenge on others around them because of some trauma that they’ve experienced in their past. Whether it’s being hurt by their parents emotionally or physically or by some other person in their past, they tend to force that revenge on others. Dealing with their emotions is not their strongest trait. Acting on impulse is the way that they deal with the trauma and emotions.

They are incapable of handling their emotions

Everyone gets angry and loses their temper sometime in their life. We can even say things that we don’t mean to others and regret it immediately. The anger can sometimes pass momentarily, however, if it’s a result of a trauma that has not been dealt with, it can occur many times.

If the person has been hurt in the past and has experienced a kind of trauma can make them build a wall around them which stops another hurt towards them. They tend not to keep people close to them because that makes them feel vulnerable to hurt. You’ll usually find these people keeping a distance from others.

Even if they are mean to you, don’t take it personally

When there’s no reason for a person to be mean to you and they are, it’s usually not about you. It’s about something that happened or is happening in their life. They only see you as a threat to their self-esteem or just a way to deal with their traumatic emotions. Never take these hurtful words personally. However, it is not your job to fix this person so don’t take it as your objective to help them. Understand that they might be dealing with something more than what looks on the outside.