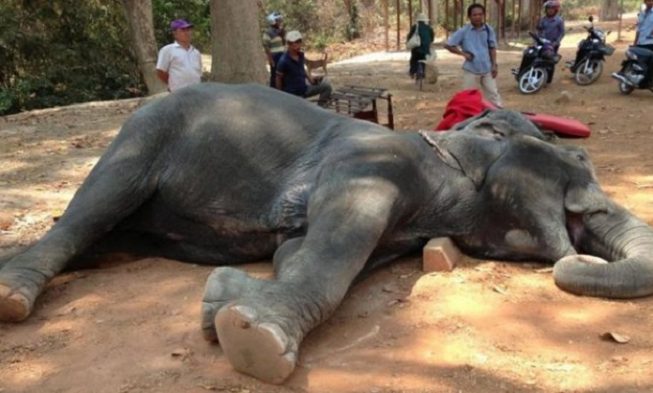 Every animal in the world has its rights and responsibilities for the planet. Aside from our work, we humans have the freedom to enjoy whatever we want to during the day. So why not let other animals enjoy themselves as well and let them live a life outside of captivity? Why keep them as slaves to our cause so that someone will profit from them?

Sadly, this is the reality that we all live in even if we’re not directly part of it.

More than half a million animals are being enslaved in the industries for tourism throughout the world. These animals live horrible lives from the start to the finish. These animals are punished daily and are taught with fear and domination.

Back in 2016, the death of Sambo the elephant made many people angry around the world. The elephant was used to give tourists rides to Angkor Wat in Cambodia. This is the largest religious monument in the entire world.

Sambo was working on a really hot day for 45 minutes carrying two tourists separately to the religious temple. Due to the heat and being overworked, the elephant collapsed on the road. Experts believe that the elephant suffered a heart attack due to the heat of 100 degrees.

A veterinarian examined the elephant’s body and confirmed that she died “due to high temperatures, heat exhaustion and lack of wind that would have helped to cool her”.

The elephant worked from 2001 with Angkor Elephant Company. Oan Kiri, the manager, made a statement that the company was sad about the tragic loss.

Companies like this usually take the elephants from their mothers when they’re still babies. The elephants are given no food, water, or breaks for hours while they carry tourists to the destination.

When it’s their time to rest from the tours, the animals are chained and cannot move. Because they are separated from their families, they mostly grieve and feel lonely while being locked in cages.

Jack Highwood runs a charity whose goal is to help the elephants hold captive in Cambodia. The project is called Elephant Valley Project and Jack had this to say:

“It is the smoothness of the trekking elephant’s foot that always amazes me and [is] testimony to how many kilometers they must have traveled to get into this situation. Very sad.”

Change.org made a petition after the death of Sambo which reads:

“There is no such thing as cruelty-free elephant rides. What you don’t realize is that a ‘once in a lifetime’ or ‘bucket list’ item for you, means a lifetime of misery for wild animals.”

The International Union for Conservation of Nature already listed the Asian elephant as endangered. Additionally, the elephant rides are listed as the cruelest activity you can do on a holiday by the World Animal Protection.

Animal rights should be followed and those who don’t follow them should be held accountable. There’s no reason why we should disregard their right to live a normal and pain-free life.

Animals should be treated in a way that’s best for them and not used as food, clothes, or entertainment.