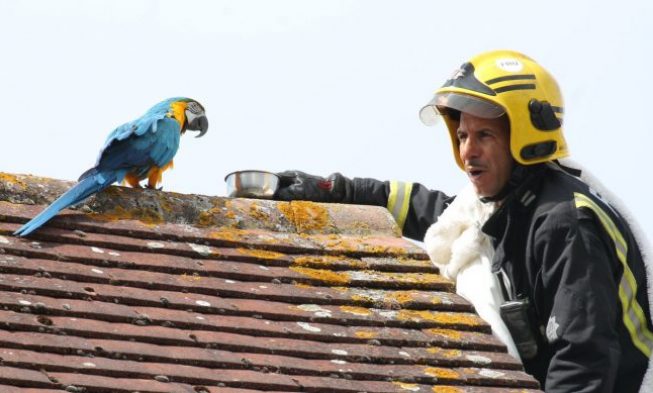 Firefighters have one of the most courageous and life-threatening jobs in the world, as they try to rescue endangered people and animals from fire.

But, not everyone respects their duty.

Jessie, a Macaw parrot was stuck on a roof for three days in London. Some of the locals thought that Jessie wasn’t able to come down because of an injury or trauma. But, she wasn’t pleased when a firefighter came to the roof to take her down.

The parrot was located on a roof in Edmonton, London, as The London Fire Brigade was asked for help. The owners and the RSPCA were concerned about Jessie’s well-being and wanted to get her down as soon as possible.

In order to get her attention and not to frighten her, the fire crew manager persuaded her with nice words, such as the words “I love you”.

Chris Swallow, a London Fire Brigade Watch Manager, was watching the whole process, and he stated that the crew manager wanted to be the hero who will rescue the Macaw parrot. He took the ladder and went up to meet Jessie.

Chris Swallow said:  “While Jessie responded ‘I love you’ back, we then discovered that she had a bit of a foul mouth and kept swearing, much to our amusement.”

They were impressed by how good Jessie knew Greek and Turkish, as the rescuers tried to speak to it in those languages.

Yet, the parrot was stubborn and didn’t want to come down to her owners.

Then something amusing happened. Jessie flew to the neighbors’ roof and then to a tree. Fortunately, she was not injured and everyone was pleased to see her flying around. The parrot wasn’t mad at all, and she soon landed on her owners’ hands.

Jessie the parrot in now home safe & sound with her owner and she had this to say to the firefighters who came to help her in #Edmonton https://t.co/Th2nlVCq7I pic.twitter.com/3ABkzH2nHY

After the incident, Swallow added that everyone who faces problems like this one should contact RSPCA firstly. If some animal is stuck, injured or in distress, people need to call them.

However, firefighters are still available if the RSPCA refuse their help, or some other animals need them.

Everyone was happy after Jessie came back home. The owner event sent a video of him and the parrot to the firefighters to express his gratitude.