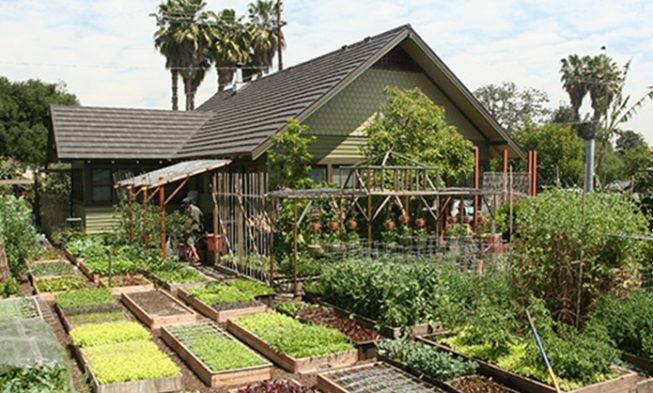 Many people believe that it’s impossible to grow most of our food and have a supply of fresh, organic food in our gardens. However, there’s one family that proves us wrong.

The story is about the Dervaes family. This family grows 7 000 pounds of organic food annually. They grow the food on just one-tenth of an acre. Besides of providing a good income, it also takes care of 90 percent of their vegetarian diet. This family spends like $2 per day, per person on other kitchen supplies. And their permaculture garden is highly efficient and productive. Following their method, they make over $20 000 annually from extra produce sold in Los Angeles, which is just fifteen minutes away.

Just 100 feet away from the major highway, fifteen minutes from downtown Los Angeles, a fifth acre lot was transformed into a mini paradise. This family decided to build a house, a garage and a driveway and to use to remaining tenth of an acre for a tiny food forest. Their forest produces 7 000 pounds of food per year, with no synthetic fertilizers whatsoever. Their secret lays in the permaculture methods. The methods they use mimic Mother Nature to create nutrient and bacteria rich soil. Permaculture methods are good because they help regenerate the soil.

When Darvaes moved to his Pasadena home in 1985, he noticed that there was no soil, only adobe-like clay. It was pretty useless for growing anything. Nevertheless, the family spent many years regenerating the soil. For that purpose, they used rock dust, chicken and dust manure, fermented compost and active microbes. They put the gardening plants closely together as much as possible so as to prevent evaporation from the soil and to save water. The Darvaes believe that it’d be better to never leave the soil bare and exposed to elements.

How do they work?

The family members do everything by hand, except for the times when it comes to using one of their favorite tools, and that’s the soil-block maker. They like this tool because it makes it possible for the new seedlings to start in blocks of soil. That way, they are ready to replace the annual crops as soon as their season starts.

Darvaes had no idea that he would end up living in Pasadena, California. But after he noticed that GMOs had entered the food supply in 2001, he got all excited and wanted to find out how much food his little plot was able to grow. He was eager to work with acres but at the same time he was too impatient to wait for so long, so he started working with what he had.