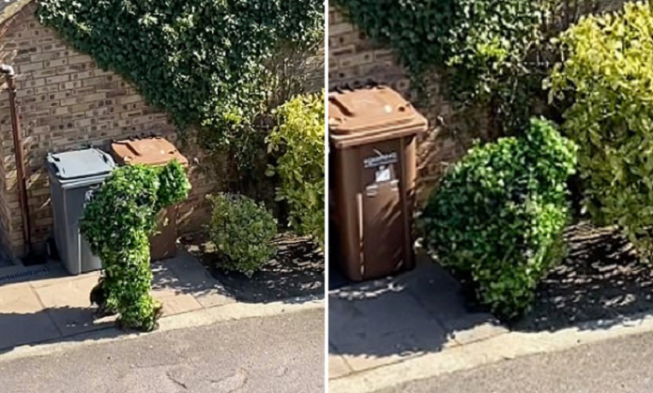 CoViD-19 has imposed changes in people’s daily habits in the United States and Europe as isolation measures increase, with restrictions on the movement of people, curfews, and people only able to make house orders. This limitation of movement is a big problem for many, and individuals, not wanting to stay inside, try to avoid them. in addition to many innovative ideas for how to avoid isolation, a man in one block in the UK was spotted by his neighbors as he was coming down the road disguised as a bush. His neighbors Nicholas Murray and Madeline Mai-Davies even filmed the odd appearance and posted two videos on TikTok.

The videos posted by this couple have garnered millions of views on several social media platforms in no time.

The man moved carefully down the street, covered from head to toe with fake leaves, hiding behind trash cans, then stopping and remodeling in the shape of a bush while in open grass. At moments in the video, the person can be seen constantly moving down the street and rolling along the road as if he were in an action movie.

But it seems that this man did not take this action just to get out of the house or for any secret reason. He later returned with a bag of groceries, and grocery shopping was still allowed with some restrictions.

“Got his shopping. Turning up to the party while on lockdown.”

Commenting that event for Caters News Agency, he added that he was surprised that video went that viral and get 16.5 million views. Their intention was to transform that difficult time in something interesting, to bring smiles, laughs and hope among people.