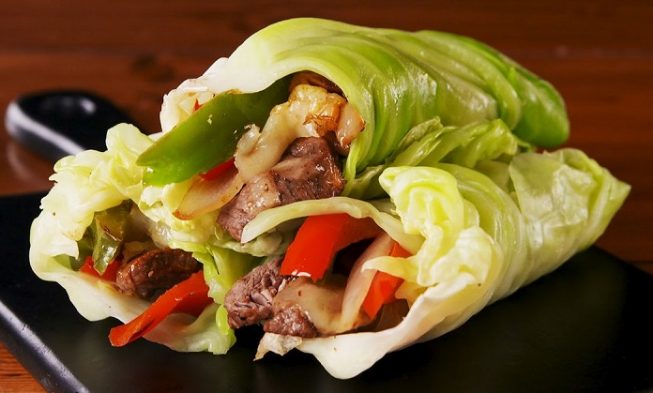 Many people are fans of the Philly cheesesteak, however, the calories and fats in one of these sandwiches can make you think twice of getting one. Cabbage wraps came to the rescue, replacing the buns and giving you the option to eat Philly cheesesteak and not gain the extra calories. The cabbage is an alternative for the bread of the sandwich and all of the other ingredients go inside of the cabbage which serves as a wrap. Not only is it low on carbs, but tasty as well.

The sandwich began as an early 20th-century food truck item and since became the most iconic food in Philadelphia. If you want to eat these kinds of food and still keep a healthy diet, then this alternative with low carbs is just for you!

When you cut the beefsteak in thin-sliced pieces and smother it in melted cheese on top of a long crusty roll you get the classic Philly cheesesteak. People also add fried onions or sweet peppers on the top of the sandwich. It does not matter how you like your sandwich, the natives of Philadelphia and visitors from all over the world can agree that the sandwiches are history for this region.

Pat Olivieri was the one who invented the original cheesesteak in the 1930s. Even though Pat was a hot dog vendor in South Philadelphia, he decided to throw some beef on the grill one day and add it to an Italian roll. A passing cab driver was intrigued by the smell and instead of ordering the regular hotdog, he decided to order a steak sandwich.

After that, the sandwich became very popular and everyone had heard of the delicious steak sandwich. After the success, Pat opened his restaurant which he called Pat’s King of Steaks and it was located on 9th Street.

You can make wraps out of cabbage which becomes a great alternative to remove the carbs from many meals and pack them with some amazing health benefits. Cabbage is a very healthy vegetable, giving benefits from hearth health to digestion.

Even though the original recipe of Philly cheesesteaks is very delicious, sometimes people need something lighter from the menu. Whenever you have a craving for Philly cheesesteak, try replacing the roll of the sandwich with a wrap from a cabbage.

With this amazing recipe, you will decrease the intake of carbs and gain the beneficial substances contained in cabbage.