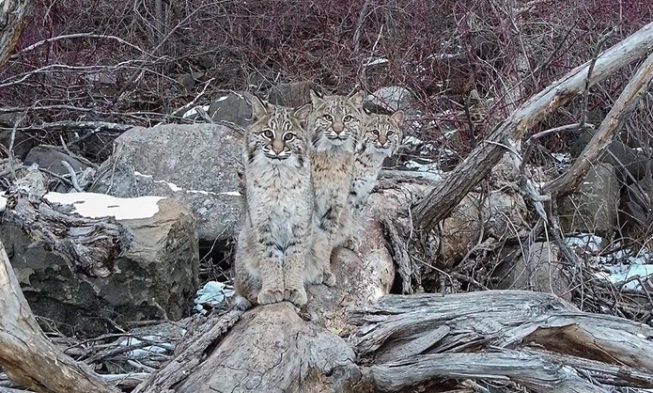 Being a great photographer who captures the most wonderful photos means much more than just having the required technical skills, foresight and intuition.

In many cases what you need in the first place is luck! When you think about it, it’s really hard to make a plan of how to be at the right place at the right time. Some things just can’t be planned, no matter how hard we try.

Mike Mayou is one such photographer who got extremely lucky to be the owner of a flying drone that caught a trio of bobcats sitting on a log, near the icy water. He was flying his drone over the St. Louis River in Minnesota when he noticed the trio and decided to recreate the moment in a once-in-a-lifetime photo.

This amazing photo features all the three big cats, looking right at the camera. They have the recognizable curious expressions that remind us of the kittens we are used to.

How did it all happen?

Mike Mayou, who is a photographer, was flying his drone over the St. Louis River in Minnesota on December 16. He was out on a photography adventure. While doing so, he noticed a trio of bobcats sitting on a log together. They looked very comfortable and it seemed like they were hanging out or something.

Bobcats are so difficult to be spot together because they are solitary animals. So that’s why he got all excited when he noticed them because he knew that it was pretty rare occurrence. Therefore, he was very happy that his drone made it possible for him to interact with them in a very unique way.

He said that they appeared to be willing to make their little collaboration work, since they were standing and sitting still. That way they helped Mayou to capture a few photos of them.

Mayou says that due to his drone he was able to capture these unplanned images. Knowing that it’s really almost impossible for humans to see something like that, he was happy to have had his drone and capture the animals in a unique way.

But he admits that he may have got too close to the animals. And if he has one such opportunity one more time, he says the he wouldn’t go so close to them. He says that their behavior could change and it’d be bad if the drone is so close to them, as it was this time.