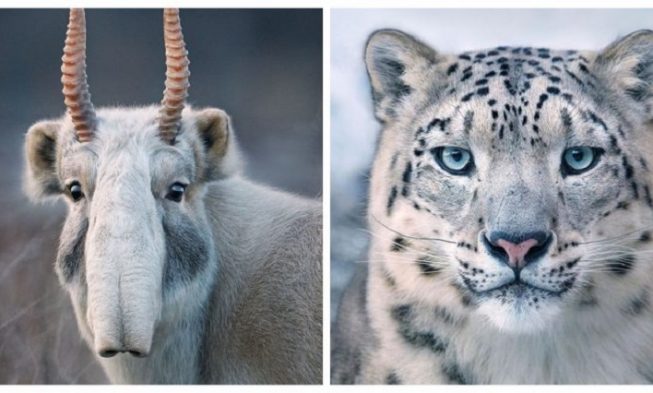 Some endangered species are almost unknown for most of us, however, this photographer from Britain named Tim Flach took pictures of these animals in their exotic habitats for almost 2 years just so he can capture their beautifulness and document it.

Endangered allows us to have a rare, intimate view of the lives of some of the most threatened species on Earth, spreading the awareness that there is still time to love and care for these animals.

The pictures show different endangered species such as the snow leopards, polar bears, and cheetahs all the way to the more exotic species such as the Philippine eagle, saiga, and olm salamander. Flach was able to show us a biodiverse range of species that are endangered, showing us all of the challenges that these animals are facing, from the destruction of their natural habitat to the poaching and selling them on the black market.

When we stare in the eyes of these animals, we can feel their hardships and we can be only left heartbroken to think that they are considered worth less than any single one of us.

Who’d have thought that buying a bottle of wine with a real cork might help save this magnificent cat? Formally classed as critically endangered the worlds most threatened cat is inching back from the brink. The Iberian Lynx’s main hunting ground used to be the cork oak forests of Spain and Portugal, but unfortunately the switch to plastic corks has impacted on the Lynx’s main source of food, the wild rabbit. So don’t feel so bad for joining in Wine Wednesday 🍷 IUCN Red List: Endangered #iberianlynx #lynx #cat #bigcat #canon #wine #cork #endangered #timflach #photography #wildlife

From it’s blistering pace to its wanderlust, the cheetah is uniquely specialised for a slim ecological niche: running down prey in a typical home range. The cheetah is vulnerable to outbreaks of disease due to its alarmingly limited gene pool, with all of today’s cheetahs being as closely related as twins. #iucnredlist #endangered #cheetah #cubs #bigcat #africa #desert #timflach #photography #conservation #wildlife #worldcheetahday

The Crowned Sifaka This shot is intended to eco the anthropomorphism of a child sat at a school assembly, which emphasises a sense of vulnerability. The Sifaka have exuberantly sideways pogo with arms flung high for balance Unfortunately their homes in the tall Madagascan trees are being destroyed and they only survive in micro pockets. ICUN Red list: Endangered It is also the cover of my new book, Endangered. #endangered #conservation #wildlife #sifaka #lema #primate #photography #timflach #portrait #vulnerable #cute #fluffy

I’m talking @zsllondonzoo this evening about how artists and scientists can work together to raise awareness of endangered species. Here’s the magnificent Saiga, who is relatively unknown and would probably feel at home in the cantina in Star Wars. #zsl #endangered #saiga #wildlife #wild #starwars #nature #antelope #timflach #photography #conservation #critical

Ya Yun ‘Elegant’ the Giant Panda Even though it’s work from a previous project, the panda has been included in the book ‘Endangered’ because it’s an excellent example of a portrait the creates an emotional connection with the viewer, it’s also a great success story in the world of endangered animals. #endangered #timflach #animals #photography #panda #elegant #wildlife #china #hasselblad #broncolor

The majestic snow leopard is one of the most endangered big cats, with its mountain territories shrinking due to farming and climate change, and an average of four snow leopards killed every week since 2008. Around four to seven thousand remain in the wild. IUCN Red List: Endangered #endangered #iucnredlist #timflach #photography #wildlife #leopard #snowleopard #mountains #bigcat #portrait #character #hymalayas