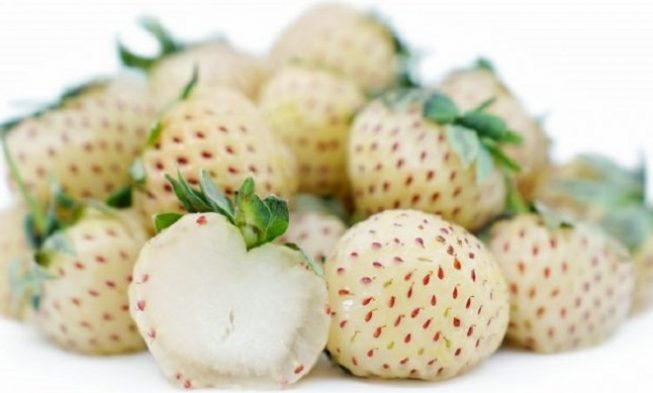 These two strawberry species spontaneously crossed and created the mother of all modern strawberries – Fragaria Ananassa, which can be red and white.

The white berries (pineberries) were female, while the red berries, known as strawberries were male. The red strawberries were self-pollinating and they became the dominant commercial berry, which is not the case with the pineberries, and they nearly disappeared from existence.

The popularity of pineberries raises within the last 20 years since the Dutch breeder Hans de Jongh created a patented variety called “Natural Albino.”  They are looking opposite of the traditional red strawberries, which have yellow seeds because they have red seeds and whitish pink flesh.

Other characteristics of the pineberries:

-Their flavor is a cross between red strawberries and pineapple.

-They are rich in vitamin A, vitamin C, and antioxidants,

-Pineberries are more nutritious and flavorful than regular strawberries

Because of their smaller yields and short-shelf life, a decade after their debut, the British grocery store chain Waitrose announced that the berries are back by popular demand, and it is hard to find them in the U.S. grocery stores.

Fortuitously, for those who love them here is good news, they can be grown at home.

We offer you some tips on how to do it successfully:

Growing pineberries is possible throughout most of the United States. They can be grown in pots indoors, which helps in protecting against the extreme weather.

Pineberries need a good quality soil mix, which should be made of:

1)Pineberries prefer slightly acidic soil with a pH of 5.5 to 6.5, as they are woodland plants.

2)Pots or patch should be positioned on a place that has 6 hours of direct sunlight or 8-10 of bright, indirect light.

3)In order to make room space the plants 12 inches apart from one another.

4)Feed the pineberries with liquid fertilizer throughout the summer.

5)Harvest them when they get pale pink and round.