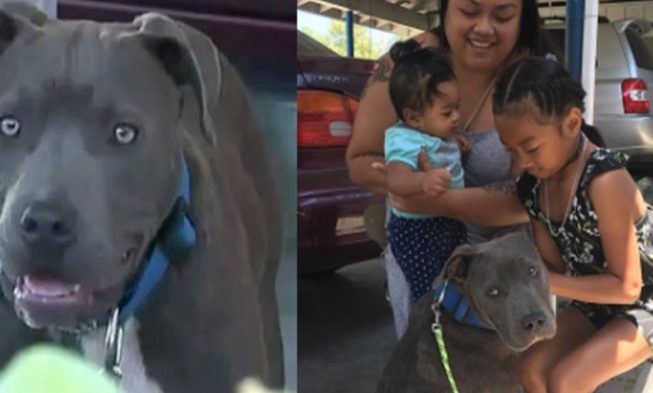 Throughout history, there have been many stories of how a dog, man’s best friend, saved them in dire situations. Pit bulls should not be excluded from these stories and here is one such story that will amaze you.

On a normal night in Chaichanhda household, after everyone went to bed, the parents in their room and their toddler in hers. However, during the night, a tragedy was beginning to unfold that would lead to terrible consequences if not for the unexpected hero.

When their apartment located in Stockton, California was on the verge of being burnt down from a fire, the family’s 8-month-old pit bull named Sasha saved the family’s lives. The pit bull that was outside at the moment of the accident started barking at Nana Chaichanhda’s door. This was unexpected for Sasha since it was out of her character to bark during the night. However, Sasha sensed the fire coming from the neighboring apartment and quickly started warning the family and wake them up.

Nana was surprised to see her dog barking so loud and knew instantly that something was wrong. Nana went out of her room and realized that there was a fire and it already reached their apartment. Instinctively, she went to grab her toddler from the other room, making her way from the fire. She was surprised to find her dog, Sasha, in the room.

In all of the chaos, Sasha heroically reached for the toddler even before her own mother and grabbed the baby by the diaper. Sasha was determined to pull the toddler out of the bed and carry her outside of the crumbling apartment. When Nana saw her, she was persistently trying to pull on the diaper of the baby.

Nana quickly grabbed her baby and the pit bull and ran straight out of the apartment.

This heroic dog not only warned the owners of the chaos that was about to come on them but also tried to save the little girl. Sasha managed to get the child out of the room while Nana carried them both after. The dog did not hesitate to go through the fire to save the girl’s life.

Because of Sasha, the family survived the fire even though their apartment burned down. Nana’s cousin who lived in the same building also suffered from the fire and together with Nana, they are living at their aunt’s place who stays in the same complex as them. The woman took them all in and was thankful for the pit bull for saving the lives of her granddaughters.

The fire is being investigated by the Stockton Fire Department. The fire department is determined to figure out what caused the fire that disrupted many lives of the building.

The entire neighborhood is in awe of the heroic pit bull even though most of them did not trust the dog before the incident. After the heroic action of the dog, they understand the breed much better and praise Sasha for her heroism.

“If it wasn’t for her, I would have still been in bed and things could have taken a worse turn.”