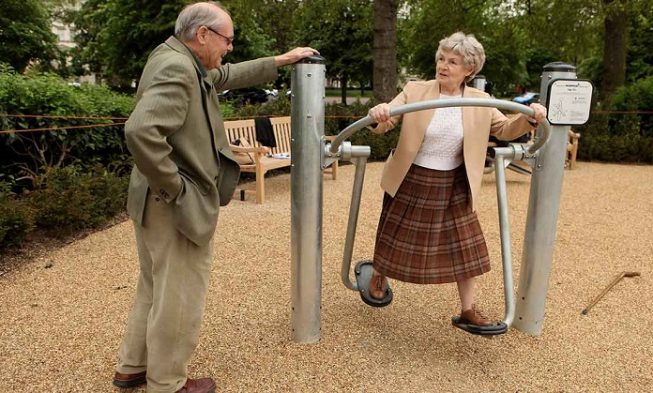 One of the great ways to improve the kids’ motor skills and coordination is to take them to the playground regularly. Additionally, it will prove them fresh air, sunshine, and interaction with their peers, which amazingly helps in building socialization and communication skills.

However, the same idea of playgrounds for kids could be applied to elderly adults, too, because those two age groups have more in common than any other. Both groups require interpersonal relationships, and they need informal and mild physical activity to develop their bodies or maintain/ improve fitness.

Of course, the senior parks can’t be equipped with the same equipment as kids parks are with swings, crawl tunnels, and others. The equipment in these parks should provide improving muscle strength, balance, and flexibility, motor coordination [1]. The seniors need exercise bikes, flex runners, cross-trainers, sit-up benches, flex wheels, and low-speed treadmills.

As the loneliness and isolation is a common problem amongst the elderly population, these parks besides the improving the physical wellbeing of the elderly, have a purpose to socialize them. Their seniors will have the possibility to meet other people, share memories, and have the tea in the park.

The spokeswoman for The Royal Parks, Joana Hughes said: “While there are certainly physical health aspects to the playground, it is also there to nurture social and mental health.”

Senior Parks Around the World

The idea of playgrounds for seniors is gradually becoming a common sight around the globe, spreading throughout Europe and Asia in the last decades. This idea was introduced in China in 1995 when they set up a park to serve as a recreational area for seniors [2].

Following Japan, this idea was accepted by several European countries. The Pri.org reported that this concept was a huge hit in Spain, especially in Barcelona where were set up about 300 senior parks [3]. These parks are invested by the Spanish government, which strongly believe in them. According to the analysts, about 40 to 45 percent of the Spanish population will be 65 by 2050. For that reason, the top priority to the Spanish government is to keep this age group mentally alert and physically fit.

In the United States, there are already parks exclusive to seniors only, and they are taking a different approach for the most part. The focus of the authorities in the USA is on populating the country with multi-generational parks, suited for both children and seniors.

The elderly, accompanied by the children improve their mental wellbeing and make them happier. Both age groups interact more warmly with one another. There are many cases where grandparents serve as babysitters while the parents are at work. So, the recreational areas for both the young and old was a nicely aimed shot.

In the USA there is a non-profit organization – KaBOOM! that helps communities build playgrounds for children. They are buying unattractive, abandoned and isolated parks in various cities around the country and transforming them in the playgrounds. “KABOOM!” took to the idea of multigenerational parks and presently, they’ve built over 53 such parks across the country. According to this organization, in one of their Cleveland-based projects, the seniors formed a fitness club to foster interaction in their new park while the children played.

Sarah Pinksy, Director of Client Services at KaBOOM! said to The Huffington Post: “Play is a great connector for adults and seniors and the children in their lives. In addition to the cognitive and physical benefits of play, it can also reduce stress in adults and is proven to help combat toxic stress in kids.” .

According to Colin Milner, CEO of the International Council on Active Aging, these environments can be highly social, and are something positive and invigorating about that, especially in the case where the children have moved away or a spouse has passed on.

Playgrounds are Essential for Reducing Hospitalization

In order to reduce the rates of hospitalization and old-age symptoms in elderly persons, the experts recommend exercising and outdoor activities. In most of the cases when the seniors are encouraged to get out more frequently, they’d be less prone to requiring medical attention as they get older.

A good example of equipping the parks for elderly citizens is noticed in the City of La Marque, Galveston County, Texas. They spent over $36,000 in 2014 to equip Carbide Park for that purpose. The park was equipped with fitness steps, fitness ramps, zig-zag pipe, cobweb floors, stretching boards, throttle bar, seated bar grabs, and several other machines, which help to maintain flexibility, mobility, and improving balance.

The commissioner in the county, Stephen Holmes explained that the aging population (over 65) is looking at some of the major causes for hospitalization. He emphasized that: “Much like you see kids gathering at playgrounds, I’m hoping to see the same thing with seniors here, gathering at playgrounds and creating a social aspect for them.”

More of these parks are needed everywhere around the world because the elderly deserve to have recreational spaces to combat loneliness and symptoms associated with inactivity. The elderly persons should be joined by the children, which company is invaluable to their mental health and overall wellbeing.