A woman has reunited with her son whom she gave up on adoption more than three decades ago after taking a DNA test and learning they were genetically compatible on 23andMe. For many women, giving a baby up for adoption is really hard decision. For this woman, who got pregnant at just 18, it was heartbreaking. She knew it would be the best for her baby. Thirty-three years later, she finally reunites with her adult son. This is their really moving story.

Melanie Pressley gave birth to her first son Greg Vossler, 33, in Canton, Ohio, at the age of 18. She wanted to keep the baby, but her boyfriend at that time didn’t support her. He told her that if she kept the baby, he would not take an active role as a father. Heartbroken, the young woman knew that she couldn’t take care of a child due to her financial situation. She desperately wished the child two loving parents, not one. With that, she decided to give the baby up for adoption instead.

The baby was born on June 17, 1988. She didn’t give him a name because, she wanted his adoptive parents to have the opportunity to do so. Although technically not allowed, she was able to hold her little baby in her arms for a few moments. Her sister took a photo of them, which is the only connection she had to her son over the next three decades.
Later Pressley got married and had three more children. But she has never forgotten her first child and was thinking of him, especially on June 17th. 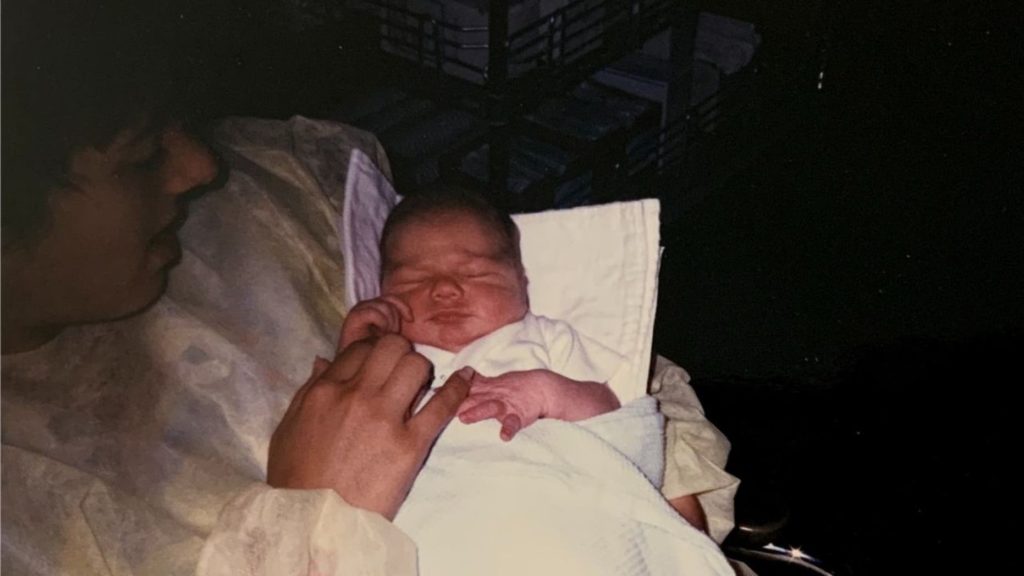 Her son, named Greg Vossler, had happy life with his new family.
“Maybe when I was nine or ten or somewhere in that age group, they shared with me the story that I had been adopted and that the woman who had given me up for adoption thought I might have better life elsewhere” he recalls. He had no idea of his biological family’s medical history. His desire to learn more about his genetics increased after becoming a father and it led him to take a DNA test in 2018.

In 2018, he decided to do a DNA test using the 23andMe website wanting to learn more about his genetics. He thought it would be a good idea for things like medical history since he didn’t know anything about his family.

At the same time, Melanie’s daughter Rachel was looking for something that could connect her mother to her first son. Rachel put her mother for the 23andme DNA test on the pretext of knowing more about her genetics for health reasons as well.

Within days, the site identified Greg and Melanie as potential relatives.
Soon Melanie texted Greg. She asked him how old he was and what was his date of birth. When he confirmed his birthday date, she then told him the truth: That she believed to be his biological mother.

They finally met in June 2021, 33 years after they separated. Greg and his family traveled to Ohio to meet Melanie and her family.

“Everyone is emotional, everyone shakes hands or share hugs. ‘I’m your half-brother, your half-sister.’ And her older sister, who helped let Melanie take that first photo, walked over and grabbed my face. The first time in 33 years she saw me” said Greg.

Melanie is so proud of her son and she believes she made the right choice all those years ago. The Vossler family raised him as an incredible man: polite, kind and caring. The next plan was for Melanie to travel to Virginia and meet Greg’s adoptive parents as well as the rest of his family.

“As you get older you get a little wiser, but there is no shame in giving someone up for adoption. There are loving couples who cannot have children and would like to raise a child.”