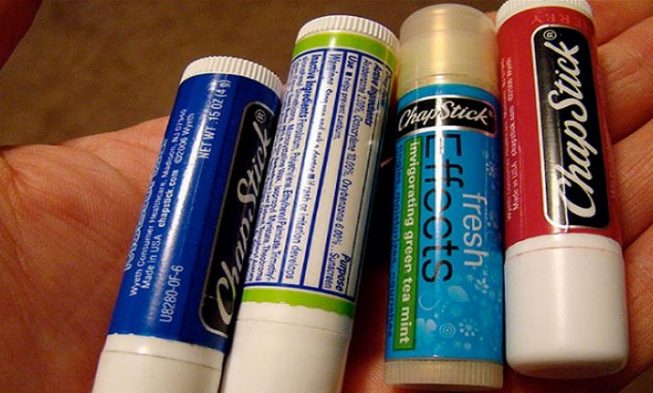 When it was invented the lip balm wasn’t filled with chemicals. It was invented by a physician named Dr. C. D. Fleet in the early 1880s, in Lynchburg, Virginia. This chapstick resembled small, wick-less candlesticks wrapped in tinfoil. Because he thought that the sales of his lip balms weren’t lucrative enough to be worth his time, he decided to seal the recipe for only $5 to John Morton.

John Morton made the first chapsticks in their kitchen at home with his wife. They continued to make them until 1963 when they sold the Chapstick business to H. Robbins Company.

Petroleum is exploited from the beneath the earth’s surface, and it is a liquid mixture, used for the production of gasoline, kerosene and diesel oil. It is also used as an addition to many beauty products like Chapstick.

According to recent studies published on the ChemTox website, in the petroleum-based chemicals were being found significant attritional effects to the nervous system and immune system, when they were used in the prolonged period of time. There were identified severe illnesses, including adult and child cancers, immune system weakening, numerous neurological disorders, autoimmune disorders and many more.

Carnauba wax, which is obtained from the leaves of the Brazilian Carnauba palm leaves, contains titanium dioxide and can cause dry skin, rash, acne, allergic reaction, skin irritation, contact dermatitis and inflammation of the hair follicle.

Isopropyl myristate is the ester of myristic acid and isopropanol and is used for treating of the head lice. It has the ability to dissolves the wax that covers the exoskeleton of head lice, killing them by dehydration. In the products like Chapstick, because of its deep absorption it can clogg the pores and thus may block the supply of oxygen into the skin, causing dead skin.

Propylparaben, thanks to the parabens it can mimic the action of the female hormone, estrogen. When that hormone acts earlier it can cause a breast cancer, which is confirmed in a number of conducted studies.

The researchers also believe that is possible that parabens may also affect men, as they found in one study that testosterone production decreased in proportion to the dose of parabens.

Red 6 Lake Is a petroleum-based product that can increase hyperactivity in children, increases brain tumors in lab rats and other abnormal cell development.

Yellow 6 is known as a cause of cancer, allergic reactions, hyperactivity, vomiting, diarrhea, migraines, nettle rash and swelling of the skin where applied.

Usually, you can find an alarming warning label on the lip balm to keep it out of reach of the children. In case of swallowing you should immediately ask for a medical help or contact a Poison Control Center. Having that in mind everyone will be concerned why to apply it anywhere near the mouth.

Here is what we offer you instead, make your own natural lip balm

1)         Add the mango butter and coconut oil into a heatproof glass measuring cup.

4)         Stirring with a stainless steel spoon, melt the beeswax, and mix everything together.

6)         Add a few drops of your favorite essential oil and you can add a few powdered herbs for the color of your choice.

You can store it into clean lip balm tubes or tins (clean and reuse old ones or buy new ones).