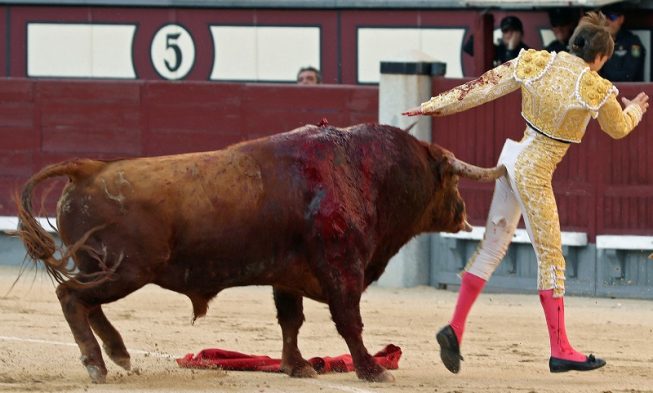 One of the most dangerous games in the world is bullfighting. Some people find it interesting to disturb an innocent animal and come closer to it, which can lead to a serious accident. One of many who experienced such danger is Juan Lean, a matador.

On May 26, the 26-year-old matador performed at Las Ventas bullring in Madrid. This event is part of the San Isidro bullfighting festival.

With the help of his red cape, he tormented the bull and as it wedged its horns, the bull threw him up in the air. The bull gored up Juan Leans backside, as the crowd screamed in shock.

Before Juan Lean chose his career, he must have known all the dangers he could face. He knew what was coming when he started to provoke the animal.

Certainly, he wasn’t expecting something bad like this could happen.

Lean managed to ran away from the bull, as two men tried to divert its attention. After what happened, he continued with his performance. But, everyone could see the blood on his white trousers.

When the fight was over, the matador rushed himself to the dispensary, where he was immediately transferred to a hospital to be operated.

He suffered a 25 cm wound in his rectum, and a possible fracture of the sacrum coccyx, as doctors said.

Máximo García Leirado, the doctor who performed the surgery, spoke in amazement about the incident. He couldn’t believe how Lean managed to continue with his show after he was badly wounded.

or walk. It was fortunate that the horn hit the sacrum and then slid upwards, rather than penetrating his stomach.”

Juan Leans wound will heal in time, but he will need to protect himself from infections that can complicate the healing process.

In this type of entertainment, both the matador and the animal can be get harmed. People should start avoiding such games because it is unnecessary to hurt bulls for human’s entertainment.