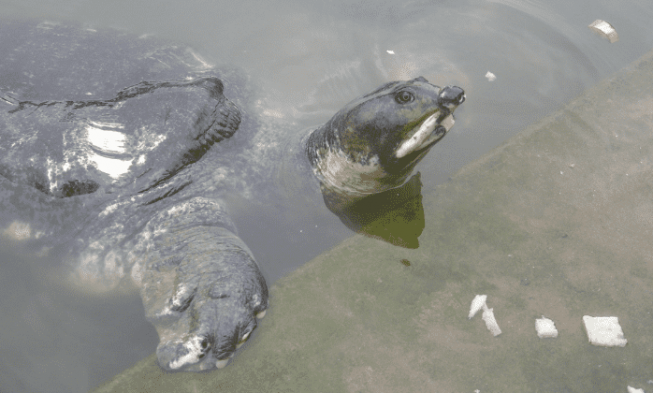 The latest attempt to save the Black Softshell Turtle, or else known as Nilssonia nigricans, to become extinct is a proof that there’s hope in people’s good will after all.

This rare species of turtle has been revived in the temple ponds of an Indian Temple located in the North-East part of India and reintroduced to the wild afterwards. About 18 years ago, the International Union for Conservation of Nature declared the Black Softshell Turtle extinct. And now, finally they saved it from the brink.

Some time ago, freshwater turtles used to be a popular local food and for that reason, much of their natural habitats were destroyed. The state of Assam has 20 out of 28 species of freshwater turtles and tortoises found in India.

The Softshell turtle, which is among the rarest 28 turtle species in India, originates from Bangladesh. As said before, now it lives in the temple ponds in Assam, India and Chittagong, in Bangladesh.

The pond, which takes credit for conservation of the turtle, is part of the Hayagriva Madhab Temple, at Hajo. This place is 30 km away from the largest city in the state of Assam. The temple is dedicated to the Lord Vishnu, who is believed to take on 10 incarnations or avatars, so as to take care of the human kind.

This is Hayagriva Madhava temple of #Assam. Black softshell turtle which was declared extinct in wild by IUCN was conserved by this temple & released in to nature. Thus nature worship of #Hinduism conserved a species from going extinct. pic.twitter.com/M5TmGYBBfz

People are referring the turtles in the pond as “Kurma avatar” because the Kurma avatar is actually his second incarnation. The caretaker at the temple pond states that no one can do harm to the turtles while they are in the pond. He says that locals are used to their presence since they’ve been watching them since their earliest childhood.

On top of that, there’s the faith attached to them, since they believe that these turtles are incarnations of Lord Vishnu. To all of that he added that turtles rely on people who feed them bread. So according to him, their conservation is guaranteed here.

Taking care about the reproduction of the turtles

Mr. Purkayastha takes care of the eggs laid by females, around the pond, on the sandy banks. He collects the eggs and cares for them in an incubator for about a year.

Anyways, at least 40 turtles have been reproduced in the pond before someone takes them to the Guwahati zoo, where they raise them. Just last year, about 35 turtle hatchlings, out of which 16 were black softshell turtles, were raised in the above mentioned temple, before they released them into the wild.

These turtles were released in the Haduk Beel of Pobitora Wildlife Sanctuary, or else referred to as “Mini Kaziranga”. This park in Assam has been renowned as a World Heritage Site by UNESCO.

TSA’s intentions for future actions which are to be taken

Turtle Survival Alliance (TSA) has been positive about the protection of turtles. Moreover, TSA has been working on a strategy about rebuilding the turtle’s wild population in the Brahmaputra river basin.

Assam was once rich in freshwater turtles, but habitat loss and over-exploitation massively depleted their population. Although black softshell turtle is officially extinct in the wild, caretakers of Hayagriva Madhav temple in Hajo are nurturing these extinct turtle back to life pic.twitter.com/DtLtXDe84i