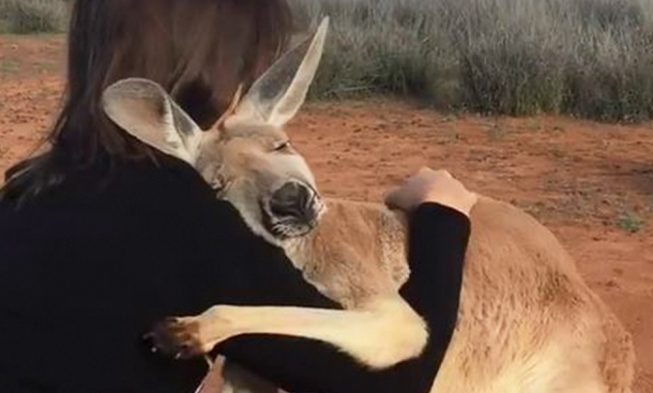 Kangaroos are cute, gentle, and filled with emotion. Their expressions of emotion make them seem human-like. The kangaroo’s human-like emotions can be seen in videos made from Australia in 2017. These videos were posted on YouTube and in them, a thirteen-year-old female kangaroo named ‘Queen Abi’ can be seen giving hugs to the people that rescued her. The affectionate kangaroo brings attention to the hunting of these animals which is a big problem in Australia. Kangaroo hunting already left many orphaned joeys.

The Kangaroo Sanctuary which is located outside of Alice Springs gives specialized care to the kangaroos. Usually, joeys that are left orphaned due to kangaroo hunting are brought to this center and after rehabilitation, they are allowed to enter the wilderness. Chris Brolga, the founder of the Kangaroo Sanctuary, founded the facility because he realized the nearest rescue center and hospital for animals was more than 1,500 km away. The 188 acres non-profit sanctuary has a rescue center and allows tourists to visit it and has people assigned to give tours.

Snuggles with Maggie, Teddy an Cindy-Lou 😍💤

Posted by The Kangaroo Sanctuary Alice Springs on Thursday, November 7, 2019

Even though there are a lot of animals that are friendly with humans, the connection that Queen Abi had with her rescuers was very special. Abi offers hugs to many of the people that take care of her at the Kangaroo Sanctuary which is very unusual for its species. Kangaroos have been known to have an excellent memory and some have been seen to form a special relationship with the human that takes care of them. These relationships are formed by contacting the kangaroo almost daily. Abi has been living in the sanctuary for almost a decade so this makes sense. She spent most of the time with the workers of the sanctuary which allowed her to get to know them. Abi is quite popular in the sanctuary because she will hop up to a person she knows for hugs and kisses.

This wildlife facility has the most precious kangaroos. You can see this by their pictures and videos posted on their Facebook page. Volunteers and employees can be seen that they take good care of each kangaroo at the sanctuary. They are all part of one large and caring kangaroo family which includes Abi.

Posted by The Kangaroo Sanctuary Alice Springs on Thursday, October 31, 2019

Australians believe that the kangaroos are over-populated in the outback because almost all of their natural predators have been diminished. As a result, many of the residents overlook the sale of kangaroo meat, hide, and leather. Some local people even think that eating kangaroo meat is good for the environment and a good alternative to other meat sources. The export of kangaroo products in Oceania makes up $29 million per year and funds more than 4,000 jobs for the country.

However, Bolgra’s sanctuary does not support this idea of killing kangaroos. Baby kangaroos can grow slowly and even if they are well-taken care off, they can die early on. When the mother of the joey is shot, its life is in great threat. Joeys and their mothers need to live so that the species can continue to live. Unluckily, Bolgra along with others that are against the hunting of kangaroos are part of the minority of Australians because the demand for kangaroo products is huge globally. They hope that this video of Queen Abi can touch people and spread the message of love, bringing attention to the whole situation in Australia and show the affection of the kangaroos.

Posted by The Kangaroo Sanctuary Alice Springs on Saturday, October 26, 2019