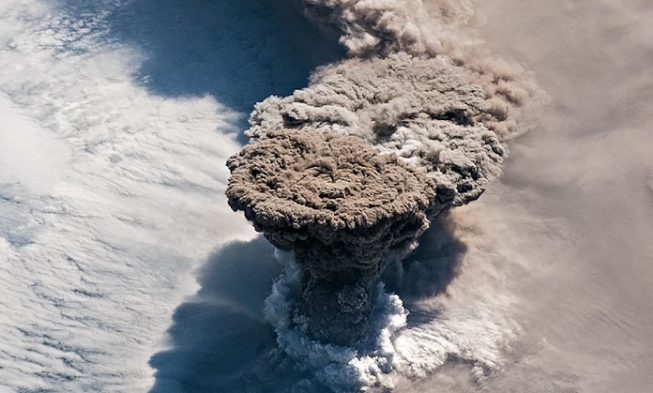 Raikoke is an uninhabited volcanic island in the northwest Pacific, between the Kamchatka peninsula in Russia in the Sea of Okhotsk and Hokkaido in Japan.  In June this year, it has just erupted for the first time since 1924. The eruption was captured via pictures by the astronauts on board International Space Station.

According to Simon Carn, a volcanologist at Michigan Tech it forms a narrow column that spreads into what is known as the “umbrella region.”

The eruption was also documented by several satellites. It consisted of at least nine explosions (6 occurred within the first 25 minutes). The ash of the volcano rose up to 42,700 feet (eight miles), and the lightning was detected in the spirals, a phenomenon is known as a “dirty thunderstorm,” explains Matthew Cappucci of the Washington Post. According to NASA, the plume reached an altitude of 10 miles.

According to the scientists, the volcanic lightning may be a result of charged particles originating from both “the material ejected from the volcano and through charge formation processes within ash clouds moving through the atmosphere.”

This volcano shot ash and volcanic glass so high into the air that it could be seen from the space, and photos released by NASA show the dramatic nature of the plume.

For the sake of airplane safety volcanologists were keeping a careful eye on the plume.

The volcano erupted on June 22, but on June 25, Raikoke was still producing some ash, rising it to a relatively modest height of around 6, 500 feet.

Thanks to the ISS astronauts, the spectacular moments of this volcano’s initial eruptions were well-maintained for all to see.