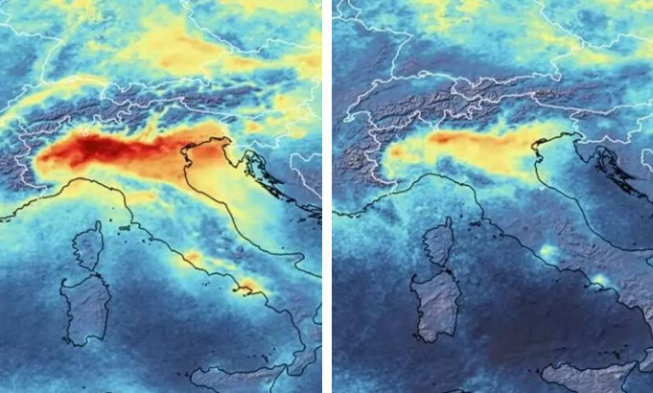 Satellite images made for Italy have shown a huge reduction in air pollution across the country in parallel with taking measures to overcome the crisis, putting all residents under strict quarantine measures.

The pictures show differences in polluted air, especially nitrogen dioxide emissions, from January 1 to March 11. They are based on data from Copernicus Sentinel-5P, taken in China in February.

According to the European Space Agency (ESA), air pollution reductions are especially pronounced in northern Italy, which “coincides with its state lock to prevent the spread of coronaviruses.”

Conclusions of the Director of the Mission Copernicus Sentinel-5P Claus Zehner points out that the decline in nitrogen dioxide emissions in the Po Valley in northern Italy is particularly pronounced. Their experts are convinced that the reductions in emissions seen coincide with the closure in Italy, causing less traffic and industrial activity.

Thanks to a policy of free and open data, these measurements, which are globally available, provide key information to citizens and decision- makers.

According to the ESA’s director of Earth Observation Program, Josef Aschbacher,

“The Copernicus Sentinel-5P Tropomi is today the most accurate instrument to measure air pollution from space.”

Their data reveal that air pollution, specifically NO2 emissions, has been clearly reduced in Italy, which coincides with measures taken to prevent the spread of #coronaviruses.

New data from @CopernicusEU #Sentinel5P reveal decline of air pollution, specifically NO2 emissions, over Italy. This reduction is particularly visible in northern Italy which coincides with its nationwide lockdown to prevent spread of the #coronavirus 👉https://t.co/4BQX4vD6P3 pic.twitter.com/7SDN8XB2vH

Until March 19, data on coronavirus casualties are as follows:

Government measures designed to curb the deadly spread of the virus have been taken late, due to lack of preparedness and confusion by state authorities and the poorly informed population.

The Italian government has approved an economic assistance package worth up to 25 billion euros, including helping workers at risk of losing their jobs and childcare vouchers for parents. This assistance is also intended to help Italian businesses and families cope with prolonged national isolation.

This virus appeared in Wuhan, China last December, and has since spread to approximately 150 countries and territories. The World Health Organization (WHO) has therefore declared a pandemic outbreak.

According to Tedros World Health Organization Director-General Adhan Ghebreyes, more than 132,000 Covid-19 cases have been reported to WHO from 123 countries and territories. Of the 5,000 people who were ill, they lost their lives.

From China, the epicenter of the pandemic has spread to Europe, and now the death toll in Europe is second only to China. Now, more cases are reported on a daily basis in Europe than have been reported in China at the height of the epidemic.

The message from the experts of all countries still remains: “you must take a comprehensive approach.”

It is recommended that each country looks at the experiences of other countries with major epidemics and avoids the thought that “this will not happen to them,” as none of this will be bypassed.