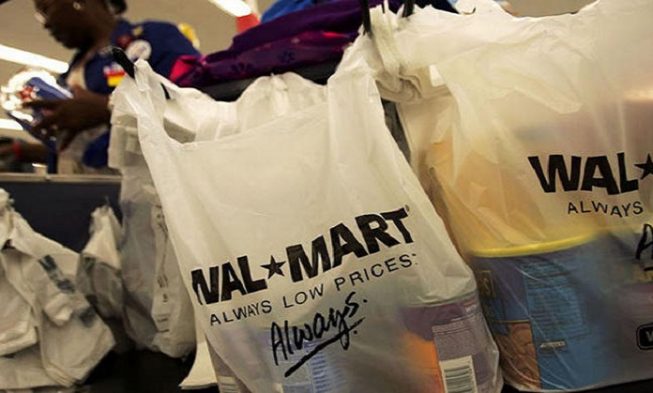 When people go to a supermarket, they want to get their items and pay for them as quickly as possible. With waiting lines on the cash registers, this is simply impossible. The popularization of self-checkout machines is the solution to quick shopping and many stores in the U.S. started implementing them. From hardware stores to local groceries or McDonald’s, you have the choice of purchasing products traditionally (cashier) or to do it yourself (self-checkout).

From the many different stores and retails that have self-checkout, Walmart is probably the biggest one. In the future, Walmart plans on going full self-checkout without the option for people to go to a cashier.

Walmart (Walmart Inc.) is an American discount store chain and one of the biggest retailers in the world. It was founded in 1962 in Rogers, Arkansas, (now the headquarters are in Bentonville) by Sam Walton. Early years, its buildings were focused in rural areas to avoid competition from bigger retailers like Kmart and Sears.

As the company grew, it developed new retail formats such as Sam’s Club discount warehouses in 1983 and Wal-Mart Supercenters in 1988. Before it changed its name to Walmart (2018), the retailer was called Wal-Mart.

Wal-Mart became one of the largest groceries in the U.S. after a decade of opening. In 1990, it became the largest U.S. retailer.

One year after becoming such a large retailer, it started opening stores in Mexico, China, Canada, Germany, and the UK.

After the death of Walton in 1992, the large company experienced a decline. However, it was able to rebound by introducing the house brand Great Value in 1993.

In the next decade, Wal-Mart remained a global leader and in the 2010s, it was able to acquire lots of e-commerce businesses such as Jet.com in 2016 and Moosejaw in 2017.

Pros and Cons of Self-Checkout

Here are some pros and cons for using the self-checkout machines:

Cost savings for the retailer is a large pro for using self-checkout machines. Replacing the customer to do the job that a paid employee would do cuts down overhead costs.

The Information Technology and Innovation Foundation made a comparison between the cost of self-checkout and going to a cashier using an airport scenario. If a person goes to a staffed desk to purchase a ticket, the cost is about three dollars. When the customer goes to an electronic terminal, the cost goes down to about fourteen cents.

It is important to know that this lowering of prices does not affect the customer at all. The retailer is the only one benefiting from this kind of change. However, many people claim that if there is cost reduction by not paying employees, many of the items that are unique to the retailer will have their prices down (ex. Walmart products).

Another big pro for using self-checkout machines is that many customers can purchase items that they don’t want others to see. Privacy and autonomy is a huge benefit of using the checkout machines.

Even though there are lots of people that enjoy using the self-checkout machines, there are lots of others that oppose them. Customers claim that they dislike doing ‘unpaid work’. Craig Lambert (author) claims that there’s lots of work that was done by someone else in the past that we’re doing right now in his book Shadow Work: The Unpaid, Unseen Jobs That Fill Your Day.

Other reasons for opposing these machines is their difficulty to use. Many people, especially older adults, cannot use these machines at all and usually have to call people to help them. Not only does this defeat the purpose of the machines, but it also makes the checkout longer since there are only a couple of workers for dozens of machines.

Starting from Fayetteville, Arkansas, Walmart is testing out one store where people purchase products using self-checkout machines. There are no cashiers in this supermarket. However, some self-checkout hosts will aid you in front of the store to help customers if they have problems with the machines. Additionally, these workers will check out the customer’s groceries if the customer prefers it.

If this testing phase goes well, Walmart will add the same setup in other stores across the United States. The timeline for this test is not specified so we have no information when they’ll decide on either implementing this new system or sticking to the old one. However, the timing will depend on different factors as well as the thoughts from customers and employees.

Representatives from Walmart claim that they hope this system will be pleasant and easy for both customers and associates.

Will Cashiers Lose Their Jobs?

Self-checkout machines will probably never go away but the main reason for panic is losing cashiers. Most likely, the cashiers will not be going away completely, at least not in the recent future. Many customers prefer using a cashier. Even though the retailer is saving money by making customers use checkout machines, they won’t be taking the risk to make their patrons unhappy. Even if the test in Fayetteville is a success and Walmart implement the self-checkout system completely, there are lots of other retailers that will stick to their normal system of cash-out.