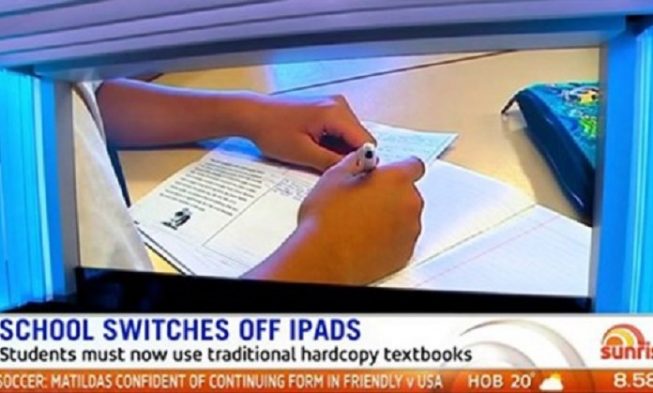 Many young children are becoming addicted to new technology nowadays, as it is a crucial way of living. High-tech devices are now becoming popular in numerous schools, and many parents are convinced that they can give more opportunities in their children’s studying.

But, doctors and scientists disagree with this idea and try to warn the parents about the disadvantages of their over-usage.

Located in Sydney’s eastern suburbs, Reddam House Private School started using the old ways of learning, which include regular textbooks and has prohibited the use of iPads. Some of their students preferred reading from pages rather than screens.

After using these devices for several years, the teachers claimed that new technology started affecting their learning skills, and did not improve their students’ technology knowledge.

Students were not paying attention to the lesions, as they were distracted by notifications and other alerts, claimed Dave Pitcairn, the principal of the school. He also mentioned that they study better from textbooks and taking notes and that researching is easier.

The principal also explains that the hard copy was not eliminated. Students had to choose between hard copy and digital in the year 11, and they favored hard copy. The students found it easier to search through the textbook.

They use more senses as they read or take notes, and they learn better that way.

In 2010 they introduced iPads and soon after that the school incorporated into classrooms in the subsequent years. After many types of research, all the pros and cons of using iPads were revealed.

Both the pros and cons were highlighted after Canadian research was made that included 6,000 students who use iPads on a daily basis to study.

The study revealed that students found it easier to research information and were highly stimulated to learn new things. Unfortunately, they became distracted during classes, and they developed poor writing skills.

Schools that spend a lot of money on new technology, computers or iPads don’t have a notable improvement in science, math or reading accomplishments. This statement was revealed by the Organisation for Economic Co-operation and Development (OECD).

If we can learn from the best education systems in the world, like in East Asia, we can see that they limit the use of technology in their classrooms, says The OECD’s education director, Andreas Schleicher. Furthermore, students who use computers reasonably do better than those who use them all the time.

By using iPads, students can become more engaged in the classroom, but the educational benefits haven’t been appraised yet.

Numerous students claim that if teachers tried to leverage the benefits of using computers and iPads, they could increase technology and learning skills among students.

Seeing that schools have a limited budget, all the updates that new technology requires may cost too much.

Further, schools need to find a way to control the internet access when it comes to using computers and iPads.

Also, there is a need for control of the device’s usage, especially when it comes to internet access.

Students tend to learn better from a hard copy and find it easier to engage with a physical textbook.

Moreover, these devices emit blue light that can lead to permanent eye damage if the user is not limited. Their use is also linked to delayed language development, mental health problems, sleeping deprivation, obesity, and many more issues.

Many claim that overusing these devices can also cause depression, addiction, irritability, and stress.

This was the right decision to switch back to textbooks, as Reddam House Private School decided to make.

If schools want to use these devices for all the pros they offer, teachers should learn more to use them and the school system needs more beneficial data for students.