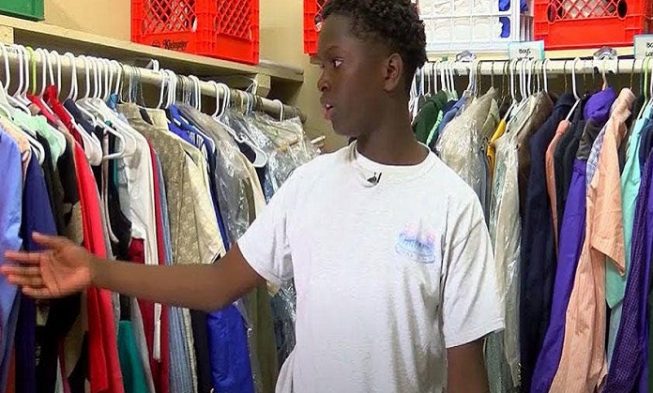 Some individuals are privileged in life because they always have everything they need, and they can even share their things with others who need them. Most often, it can make them feel better because it will help other people to be happy as well.

All those who have excess clothing and choose to donate it to a person who cannot afford him/herself will make it a simple act of making others feel better.

Although it may sound a little confusing for individuals, once they find out how Chase Neyland-Square – a thirteen-year-old did, by forming a closet and filling it with school supplies and clothing, they can follow him freely. This is made for students, his classmates to come and take what they miss. So, the Louisiana eighth-grader ensured that his classmates could get whatever they needed during the school year.

He is a student at Port Allen High School that allowed him to open a closet behind the school gym. He named the room PAM’s Pantry. In a very short time, it was packed with donated clothes that any student could take and wear.

When asked why he is doing this, the 13-year-old points out that he knows that some people just don’t have much luck. His compassion and ability to imagine himself in the place of those suffering, made him feel awful. This is, in fact, what encouraged him to help whenever he could.

“I know that everybody doesn’t have things and I’m fortunate to have things that other people don’t have, and I look at it as sometimes, how would I feel in that situation?”

He later extended the services of PAM’s Pantry to the community, not just to classmates. Their families were also allowed to come and find something in PAM’s Pantry. For example, Port Allen’s family suffering from fire came there and got new clothes for which they were eternally grateful.

Not only did PAM’s pantry focus on clothing, but they were also collecting hygiene products and school supplies, then expanded on shoes and many more items.

The school also became involved in this project, aiding such activity through the Student Program for Arts, Recreation and Knowledge (SPARK). This program has allowed students to come up with different ideas during the summer that can be used to help the school, students and their families.

SPARK was started by Jessica Major, principal of the school in 2016, with the goal of promoting leadership skills among students. Several of her interesting ideas have been applied at Port Allen High School and have contributed to improving the student experience.

“We ask them what they want to do to make the school better and through that, we have changed drastically some of the things that we do here at Port Allen Middle School,” Major said.

In addition to the usual ideas, such as extended vacations and funny ones, such as lunch with the principal, there were genuine ideas, such as better books in the library and PAM’s pantry.

Many see PAM’s pantry as a dream that blossoms, and Neyland-Square, who is a hero, simply love working there. It also advocates the idea that this project extends beyond the walls of the school, and even today the community is taking help in this wonderful initiative.

For Neyland-Square, this is an initial initiative for what he wants in life. Working to make that project bigger, for now, it will be a prerequisite for him to turn it into a nonprofit organization when he reaches the age of maturity.