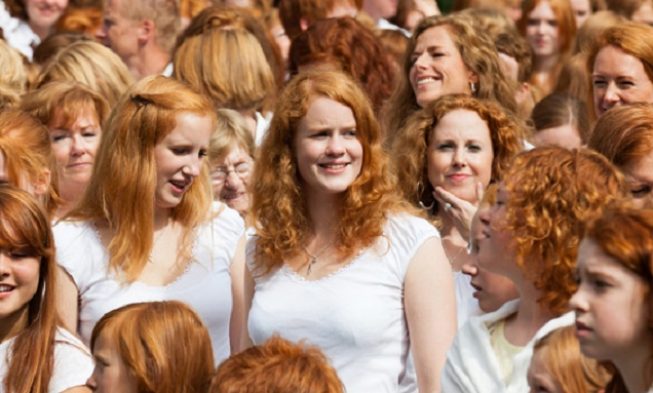 The statistic shows that only about 1 – 2 percent of the population are redheads. According to Erin La Rosa, the author of The Big Redhead Book: Inside the Secret Society of Red, they are very unique in appearance. She has a special name for them – “unicorns of the human world.” However, besides the unicity, they enjoy many biological benefits.

What Makes a Redhead?

Redheads get so much attention in the society, because of their rare appearance. That color is caused by a gene mutation called MC1R and thanks to the pigment called pheomelanin that makes the hair red.

In most of the cases, redhead children are embarrassed by being different. However they shouldn’t be, on the opposite, they should be proud and celebrate being special. The redheads have quite a fun group among them such as Prince Harry, Jessica Chastain, Ed Sheeran, and Julianne Moore. Here we can add fictional characters of Anne of Green Gables and Jessica Rabbit.

Are they really Superheros?

According to La Rosa, the MC1R gene mutation makes the redheads handle pain more effectively than the rest of the population.  A 2003 study at the McGill University showed that those with natural red hair can tolerate pain 25 percent more than others, which alone makes them super resilient.

The results of another study conducted at the University of Louisville showed that redheads are more sensitive to temperature changes. They can actually predict the coming of winter and rapid changes of the temperature. This is certainly a superpower, as they can tell you what to expect when it comes to the weather.

Another characteristic that makes them superpowers is the natural production of vitamin D more effectively than most people. As we all know, the most of the population is deficient in vitamin D, which is an essential vitamin that can fight diseases like:

Having all these benefits, sometimes makes all non-redheads little be jealous, wishing they were born “ginger” too.

For all of you who are a redhead, you should not only celebrate your beautiful hair but all the health advantages it brings you.

If you have found something else which is specific to you and other redheads, please share it with us and your friends!