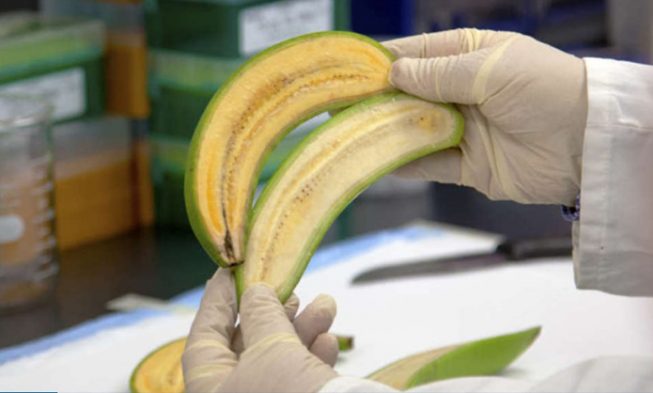 In Uganda, fruit is a major food staple. No one, however, could have assumed that a banana could save the lives of children who have a pro-vitamin A deficiency.

About 650,000 to 700,000 children die from pro-Vitamin A deficiency around the world. A few hundred thousand more are going blind. Delayed development,dry skin, infertility, and more may also be some of the other symptoms.

That’s why scientists in Australia have gathered and developed pro-vitamin A-rich golden-orange-fleshed bananas. These bananas might just save the lives of hundreds of thousands of children dying each year from this vitamin deficiency.

The scientists named the bananas ‘Biofortified’ bananas.  They managed to produce them by combining genes from the bananas growing in Papua New Guinea. These new bananas are incredibly rich in provitamin A, but not too common. They only grow small bunches. So they combined those with the Cavendish banana, the prevailing ones we all know. By doing so, they managed to make the body convert provitamin A into vitamin A.

Thankfully, they managed to grow these bananas over the course of many years. These bananas have a tremendous amount of provitamin A, which is why they have a sort-of golden-orange color and not the typical cream-colored skin.

Thanks to $7.6 million investment from the Bill & Melinda Gates Foundation, researchers from Queensland University of Technology have been growing bananas over the last 10 years.

Achieving these scientific findings, along with their publication, is a significant achievement in their search to provide some of Africa’s poorest subsistence communities with a more nutritious diet.