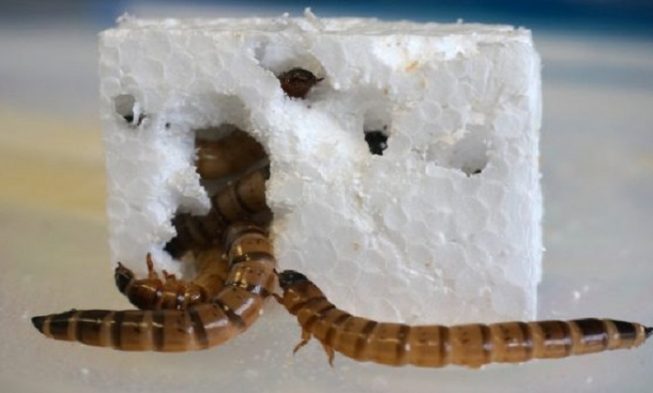 Many man-made synthetic materials, namely plastic, are not bio-degradable. Meaning, they cannot be absorbed back into the environment, unlike organic matter, like fruit peels, for example. So plastic items increase in landfills, taking up natural space, where they will remain without decomposing. In the quest to reduce waste, scientists searched to develop a way to recycle plastic. As it turns out, the method may already exist in nature. Researchers from the University of Queensland in Australia found beetle larvae that can potentially digest polystyrene, otherwise known as styrofoam. Their research was published in the journal Microbial Genomics.

The beetle larvae, known as the Zophobas morio, but more commonly known as a superworm, can digest plastic through a gut enzyme. One of the authors of the study state that these creatures can revolutionize recycling.

Over three weeks, the research team gave three groups of superworms different diet. One was a polystyrene-only diet, the second was a wheat bran diet, and the third was a fasting diet. The groups were monitored for signs of cannibalism and the superworms in the starving group were isolated from each other. The worms fed bran became notably healthier than the others, doubling their weight over the three weeks.

Next, the team watched if these larvae would grow into beetles. In the bran-diet group, nine out of ten grew into beetles and had the most diverse gut microbiome than the other two groups. For the plastic-eating group, two-thirds became beetles. While polystyrene looks like a poor diet for the superworms, they still managed to get energy from the feedings.

“We found the superworms fed a diet of just polystyrene not only survived, but even had marginal weight gains,” Dr. Rinke said. “This suggests the worms can derive energy from the polystyrene, most likely with the help of their gut microbes.”

The team used metagenomics, a technique to “characterize all the genes in the [digestive] microbiome,” according to Rinke. Essentially, they’re looking for the enzymes in the superworm’s digestive systems that can degrade styrene and polystyrene.

The Future of Decomposing Plastic

The goal is not to release an army of worms into landfills. Rather, the team hopes to identify the enzyme most capable of decomposing plastic and reproducing it for recycling purposes. This process could entail mechanically shredding plastic then applying the enzyme. “Superworms are like mini recycling plants, shredding the polystyrene with their mouths and then feeding it to the bacteria in their gut,” Dr Rinke said. “The breakdown products from this reaction can then be used by other microbes to create high-value compounds such as bioplastics.”

While previous studies discovered the unique capability of these superworms, this research goes further with the idea. “This study goes a long way towards understanding how the bacteria in [the superworms’] gut do this at the molecular level,” Australian National University researcher Colin Jackson. “[That’s] important for translation and use of this type of approach in recycling.”

Meanwhile, other studies found fungi and bacteria that can decompose plastics, but it’s unclear if these techniques would become widely used. Still, this new discovery is a promising incentive to reduce plastic waste.

“The scale-up and translation of research like this is always a challenge, which is magnified in the area of plastics by the incredible scale of the problem and the economics in terms of how cheap new plastic is to produce,” Professor Jackson said.

Still, this study stands ahead of the rest. Previous research in this area focused on just one or two possible bacteria or enzymes, making them less comprehensive as this study. Uwe Bornscheuer, head of the biotechnology and enzyme catalysis department at the University of Greifswald in Germany, said the new work is “the first solid study where they looked into the metagenome.”