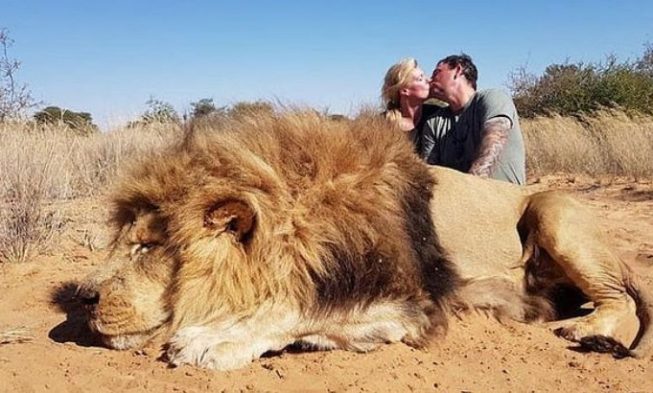 Photograph of the Canadian couple, who were kissing after killing a gigantic lion during a safari trip in South Africa was criticized online by enormous numbers of the followers.

Unfortunately, that is not the only post with the killed lion, in another post, the couple expresses their joy of hunting the king of the jungle in the sands of the Kalahari, too.

Carolyn and Darren Carter of Alberta, Canada, have their own taxidermy business (the art of stuffing, and mounting the skins of dead animals for exhibition in a lifelike state) and they present themselves as “passionate conservationists.”

However, the photos showed that they participated in the Safaris tour while they take part in shooting and killing at least two lions, which is nothing linked to the conservationist mindset.

When Darren Carter was asked by the Mirror about their participation in the hunts, he replied that they were not interested in commenting on that at all, believing that this is a political provocation.

On the other side, to attract others the tour operators frequently share snapshots online of victorious hunters alongside their dead prey, which was also the case with the Legelala Safaris Company. It allows hunters to kill zebras, giraffes, lions, leopards, rhinos and even elephants for upwards of $2,500.

According to Eduardo Goncalves – founder of the Campaign to Ban Trophy Hunting, the lions slaughtered by the couple, probably were bred on a lion farm for the express purpose of being killed for cash in small enclosures.

“There is nothing romantic about killing an innocent animal. It looks as though this lion was a tame animal killed in an enclosure, bred for the sole purpose of being the subject of a smug selfie.

This couple should be utterly ashamed of themselves, not showing off and snogging for the cameras.”

Releasing that story, the U.K.’s Mirror called for greater protection for animals slaughtered by trophy hunting. They especially emphasize protecting giraffes, which has seen its population precipitously fall in the wake of increased hunting and poaching.

The Mirror’s End Trophy Hunting campaign, also calls for a change in international regulations and laws governing the trade, export, and import of endangered species who are slaughtered by trophy hunters. 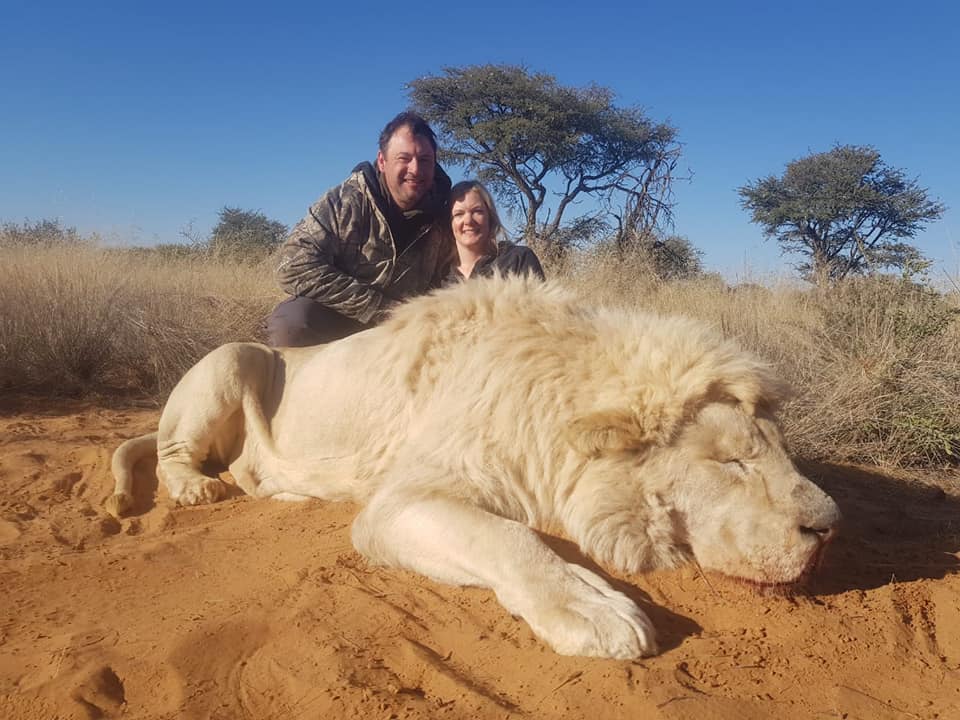 This campaign has been supported by many prominent figures in the U.K., including charities, elected representatives, and celebrities.

For the Scottish news anchor Lorraine Kelly that kind of so-called ‘sport’ is shocking and disgusting, and he emphasized that he’d like his grandchildren to be able to visit Africa and see these beautiful wild animals like he has been able to do many times.

Since 2015, when the photos from Zimbabwe were showed, where the U.S. dentist Walter Palmer posed alongside the killed lion, whom he had just killed, the trophy hunting has grown increasingly controversial.

Unfortunately, according to some evidence, over hundreds of crocodiles, rhinos, and elephants are slaughtered every year alongside thousands of bears and lions