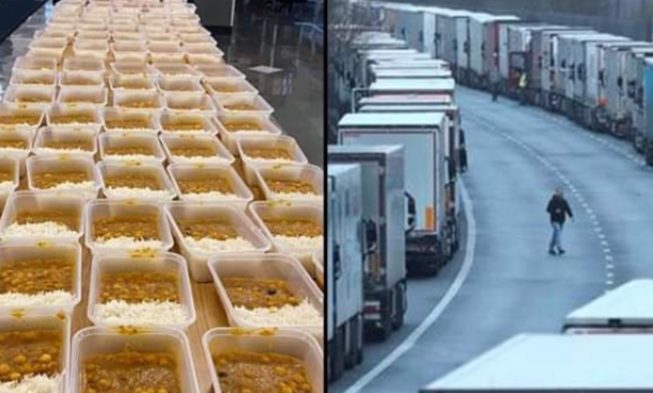 Members of Kent’s Sikh community cooked and gave away hundreds of hot meals to all the lorry drivers stuck in Dover during their wait to cross the English Channel.

When the new covid-19 stream came into place and spread all across the UK, thousands of truckers ended up stuck at the port since France closed the borders on Sunday.

Some drivers spent a minimum of two nights getting sleep in their trucks as they were forced to wait for miles along the M20.

The volunteers, who were in close cooperation with Khalsa Aid, which represents a Sikh humanitarian charity, cooked astounding 300 pasta and mushrooms dishes, as well as 500 chickpea curries.

We are on the #M20 delivering hot meals and other snacks for the truckers who are stranded due to #OperationStack ! #BordersClosed pic.twitter.com/62bhdsu6En

Once cooked, they were collected from their facilities by the founder of the organization Khalsa Aid, Ravinder Singh, who alongside a police officer escort handed them to the drivers.

The surprisingly kind and humane actions of the volunteers, as well as the organization, have been praised everywhere. There were especially nice comments on Twitter where the post blew up and people were praising the job that they were doing.

800 Hot meals ready for the truckers stranded in #Kent due to #OperationStack !

Once again, it’s deeds like these that make us regain faith in humanity once again.

As you can assume, while the borders are locked, drivers are being advised to avoid traveling to Kent.

Everyone is still advised to avoid traveling by all means while the situation settles down.