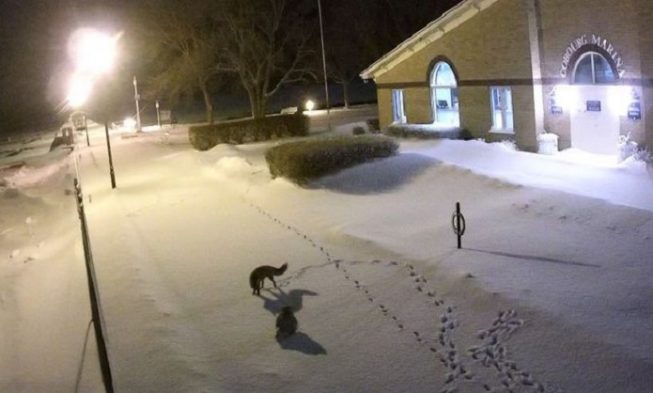 In early January, there’s been quite an interesting video posted on Facebook. It features a young fox and a snowy owl who appear to be dancing on a wild winter night.

The surveillance footage was caught at a marina in Cobourg, Ontario. This tender tango between the unique duo had almost 4 000 reviews since it’s been posted online. The fox is all enthusiastic, twirling and leaping around the owl.

On the other hand, the owl doesn’t seem to be so much into the moment. It perches all puffed up and appear to be menacing in the same spot.  And then a moment later, the pair separates and goes in different directions.

The only proof of this unusual winter ballet is a series of pirouettes which can be visible in the snow. And of course, there’s that no-nonsense owl print, found in the middle of it all.

What did actually happen?

As good as it may sound, in actuality the event is more likely to be of predatory nature. They are possible to have been motivated by the thought of a delicious late dinner.

Before they actually met, the footage shows that the owl was doing a fly-by over the fox. The owl was probably checking out potential main course. Even though many people would say that the fox was the predator, you can’t really tell that. It’s a fact that snowy owls take animals as big as lemmings home for a late dinner.

And this pretty young fox seems to be just perfect for it. One might think that the owl wasn’t probably hunting the fox since they are known for their day hunts. However, during the winter, they find it hard to come to a meal during the day, so a midnight snack hunt can happen quite often.

Nevertheless, what might have happened between the two remains a mystery. The only clue left there are the paw prints of the fox, found in the midnight snow.