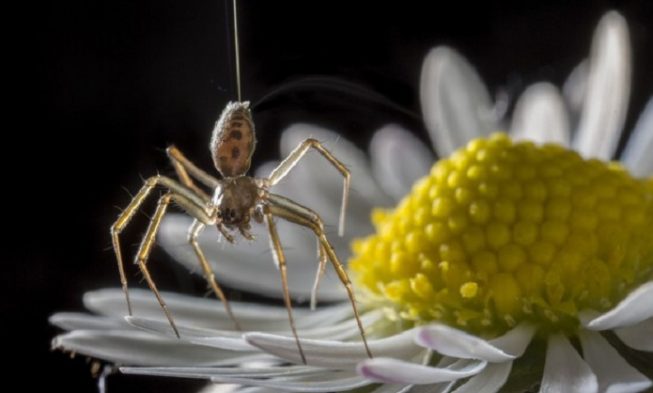 Charles Darwin was the first to notice spiders’ ability to fly hundreds of miles.

It was on October 31, 1832 when his boat, which was 60 miles offshore, got full of spiders. So he concluded that the tiny red spiders must have floated over from the Argentinian mainland.

And then yet again people found his theory unlikely because we all know that spiders have no wings they could use for flying. However, it looks like Darwin was right.

There’s a behavior which is known as ballooning. It features spiders that climb up an exposed point, just to raise their abdomens to the sky, extrude the strands of silk and float away. It helps spiders to run away from predators and competitors. But they also use it to go to new places with abandoned resources.

A study was researching about spiders’ ability to fly

There’s been a study that was researching about this phenomenon. The study was published in the journal Current Biology. In there, you can find information about spiders’ ability to fly. They point out that what spiders need to fly is only a small electric field.

Of all the arthropod species, spiders come right after bees as creatures that can sense and use electric fields.

This idea was talked about long time ago. It was probably somewhere in the early 1800s, around Darwin’s voyage. Then in 2013 Peter Gorham, a physicist, work on the idea again. He succeeded to show people that the idea was plausible. And it led to Morley and Robert working on it, by testing it with actual spiders.

To show that spiders can really detect electric fields, they used vertical strips of cardboard and a plastic box. They put the spiders on the strips, in the center of the box.

And then, they generated electric fields between the floor and the ceiling. They exposed the spiders to similar strengths of electricity to the ones they would actually experience outdoors. The fields made the sensory hairs on the feet of the spiders to ruffle up.

These sensory hairs are known as trichobothria and they are probably what spiders use to detect electricity. Morley compared it to the effect a balloon causes to your hair when you rub it against it.

And finally, they performed a set of movements which is called tiptoeing. It’s about spiders standing on the end of their legs and sticking their abdomens in the air.

It’s a behavior which is seen when ballooning only. Besides the fact that spiders were closed in boxed with no airflow at all, many of them were successful in taking off. But they dropped immediately after Morley turned off the electric fields within the boxes.