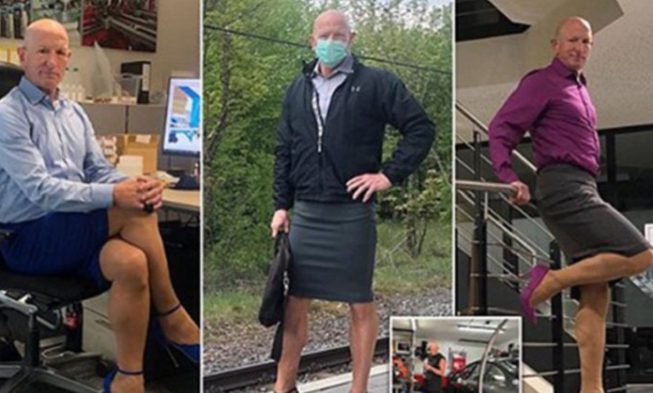 Mark Bryan, a 61-year-old robotics engineer from America is changing the clothing style for businessmen. As a straight man living in Germany with three children, Mark likes to wear pencil skirts and eight inched heels to work. He believes that clothes shouldn’t have any gender and that anyone can wear whatever they want.

His style is very intriguing because for his higher half he wears the typical business button-up man wear with a tie. He started posting his style on Instagram four years ago and he keeps on posting it every day.

Just like any other unusual thing that occurs on the internet, Mark has received both good and bad comments. The bad comments don’t even reach Mark since it’s his own decision making.

Mark started this journey during his college years. His then-girlfriend asked him to dress up in a skirt and heels and dance together. It was that moment that Mark realized that clothes don’t have a gender and anyone can express themselves as they want. People that have a problem with him wearing skirts and heels are typically men. Mark is constantly asked about his sexual preferences.

No one should be questioned or made fun of for how they look or what they wear. Not everyone should look or act the same way since there won’t be individuals but people with cloned personalities. Every single one of us is different from the other from looks, dressing styles, and characteristics. If we were all the same, then there would be no way of distinguishing one from another.

Since Mark has been wearing skirts and heels, he’s been married three different times. After a while, he’s finally able to find the perfect woman that supports his lifestyle along with his children. He is very lucky to have found a person that understands his feelings and cares for him deeply. For his children, he had to sit down and explain to them why he’s dressing the way he does. He also claims that he was nervous about wearing skirts at the office for the first time. He started with pants and heels and later moved on to wearing a skirt. That’s when he realized that people don’t care what they wear.

The LGBTQ+ community has been discriminated against for many ages. From their sexual preferences to the style of clothing or the way they act, there’s always going to be something that bothers other people about them. In this instance, Mark is a transvestite or a cross-dresser, even though in his idea, there’s no ‘cross’ happening since clothing shouldn’t be branded as male or female. With this idea, he hopes to inspire many individuals from the LGBTQ+ community and spread awareness to the world.

The term ‘transvestite’ is originating in 1910 from the German sexologist Magnus Hirschfeld. Magnus was the person that developed the Berlin Institute, the place where the very first sex change was operated, a mastectomy on a trans man in 1926.

At the moment, the term transvestite means cross-dressing compared to in the past where it was used to call transgender people. Transgender people are the ones that are born one gender but identify as the other (ex. born male, identify as female). It’s important to distinguish one from another.