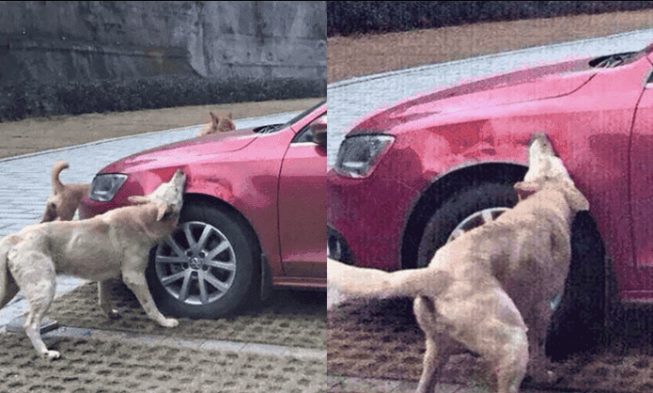 There is an old saying that goes like this:

“What goes around, comes back around”.

That’s probably why the Lady Karma exists. There’s been a footage on the Internet going on for the last few days which shows that one man in China had to learn the hard way the point of the karma. It is known that dogs are people’s most truthful friends, doing no harm whatsoever. And that is exactly why we don’t deserve them. There are still these insensitive people who are not aware of animals’ feelings. Therefore, treat them in a very bad way. However, I believe that this man in China learnt his lecture – never hurt dog’s feelings.

What’s the story about?

The story is about a Chinese man who got out of his car, just to kick a stray dog because it was laying on his parking spot. This is highly unaccepted behavior, but since in Chana there is no strict law that protects the animals, things like this are likely to happen. Nevertheless, the man happened to believe that that was the end of the story. However, the offended dog didn’t share his opinion. Later that day, the dog came back with his gang, so as to get back at the man who did him harm. They seem to have planned to destroy this man’s car as much as they could.

The dogs appear to have come up with a whole plan. Those were some really smart dogs. On the footage, you can see that there is one dog that is looking out for people who might come in and get them caught in the middle of the vandalism. All the other companions are busy chewing on the car’s body. The windscreen wipes and the metal fenders were also destroyed.

The neighbors who caught the incident on video, were so shocked that they had witnessed something like that. Soon after, the video went viral on the Internet and caused many comments by people all around the world. There were many people who cheered for this group of dogs and said that people must never forget that dogs have feelings too. There were some other who pointed out that that’s the way how karma works. Among other comments, some people said that this is a lecture that will teach people to think twice before hurting another animal.