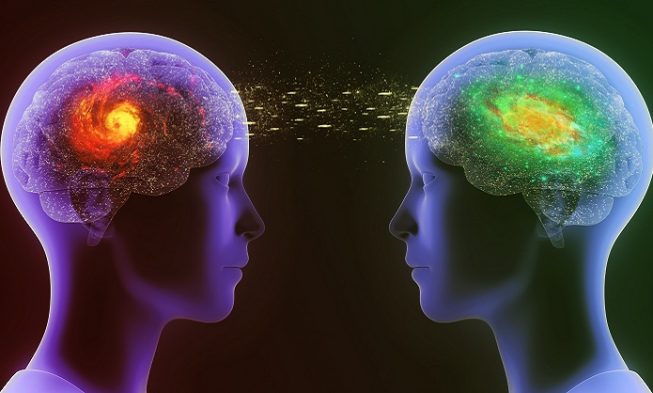 Throughout the years, people have evolved a pretty diverse repertoire of communication, starting from gesture to sophisticated languages.

All of these forms of communication together, help different people link in such a way so that they can share and express their personal experiences and work together collaboratively.

Anyways, there’s been a new study that presents certain technology that can replace language by directly linking the activity of human brain. Scientists succeeded to transmit electrical activity from the brains of a pair of human subjects to a completely third individual. The transmission was in a form of magnetic signals that conveyed an instruction to perform a task in a specific manner.

So this study broadens our view about new means of communication. But at the same time, it’s confusing us regarding the fundamental notions about individual identity and autonomy in disconcerting ways as well.

There were six people who took part in the research. All of them were engaged among each other in pairs from different areas of campus. The point of the researchers was to send signals from one person’s brain to another person via the Internet. The attempt was to control the other’s hand motions with thought. So the subjects were separated and each one of them was placed in front of a computer.

They were asked to play a computer game where they were to defend a city by firing a cannon and intercepting rockets which were launched by a pirate ship. Because they couldn’t communicate among each other, the only way to perform the activity together was through thought. Whenever they wanted to fire a cannon, they were supposed to think about doing it intentionally. The subjects were placed in a dark room, with a set of headphones on and there were not able to see the computer game. Therefore, if the brain-to-brain communication was successful, the send would be able to get the receiver to tap the touchpad and fire the cannon.

What technology did they use?

One of the participants was linked to an electroencephalography machine whose point is to read brain activity and send electrical pulses to the receiver through the web.

Whereas the receiver was wearing a swim cap with a transcranial magnetic stimulation coil which was placed near the area of the brain that is in control of the hand movements.

The research has shown that the accuracy varied, depending on each pairing. Apparently, it was due to sender’s failing to accurately execute the thought to send the “fire” command. Thus, the range of accuracy varied from 25 to 83 percent.

However, there’s still much to be discussed and researched here, but if this is to work, it won’t be just the medicine that will benefit from it. Soldiers, civilians, baseball players are just some of the vast majority of people who would enjoy the benefits of it.