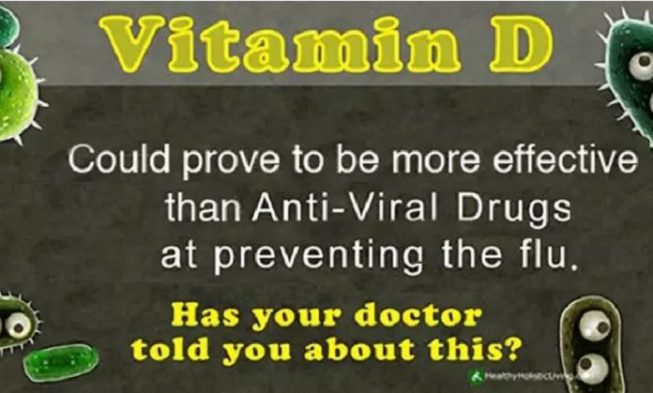 Studies conducted in 2010 in Japan have shown that the risk of influenza in children can be reduced by 50% if they regularly take vitamin D. The significance of this finding is high because vitamin D can be used in the event of an epidemic of influenza. It is especially positive because vitamin D is naturally produced in the human body when exposed to direct sunlight, has no significant side effects, and supplements are relatively inexpensive. Also, according to a study in the American Journal of Clinical Nutrition 2007, vitamin D may be several times more effective than antiviral drugs,.

Vitamin D has been shown to be even more effective when, in addition to supplements, children are allowed to spend more time outside the home. Studies and practice have shown that taking sunbathing vitamins has reduced the risk of the flu by a third of what it would otherwise be.

Dr. Damien Downing, a doctor, and medical consultant, has a specific opinion on epidemics, publicly stating that governments “love” them because then they have a chance to impose their will. According to his research, it is a shocking fact that doctors in Canada and the United States prescribe as much as 50,000 IU of vitamin D daily as a cure for a long list of chronic diseases.

A globally collaborative approach from recent 2016 research, further demonstrates the effectiveness of Vitamin D in preventing acute respiratory tract infections. The survey was conducted on more than 11,000 participants aged 0 to 95 in a total of 25 randomized and controlled trials, yielding high-quality results.

The results are clear: Vitamin D supplementation protects against acute respiratory tract infection and is safe overall. The greatest benefits are those who have had a serious vitamin D deficiency.

Vitamin D deficiency occurs during the winter months, especially in countries north of the equator. Vitamin D acts as:

–           Promotes the production of potent antimicrobial peptides in other white blood cells and in airway lining epithelial cells,

The study included 354 children. The findings showed that vitamin D protects against influenza A but not against less common influenza B. The trial was randomized and scientifically controlled, conducted by doctors and scientists at the Jikei University of Medicine in Tokyo, Japan.

The daily dose for children in this experiment was 1200 IU (International Units) of vitamin D. The trial lasted for three months and the results were as follows:

–           But for the second month, when the level of vitamins in the blood of children was higher, the advantage of vitamins was clear.

Writing in the American Journal of Clinical Nutrition, Japanese scientists say that the antiviral drugs zanamivir and oseltamivir reduce the risk of influenza infection by 8 percent in children who were exposed to the infection, which is significantly less when compared to vitamin D, which decreases by up to 50 percent or more.

In addition to being too expensive, antivirals may be too toxic to give to the entire population, as is not the case with vitamin D, which gives it additional benefits. In addition to preventing bone fractures, according to many scientists, Vitamin D also reduces the risk of cancer, heart disease, diabetes and other diseases (including various bacterial and viral infections).

A study conducted in Japan supports the theory that, due to low levels of sunshine vitamins in winter, flu outbreaks generally reach between December and March.

Vitamin D has the ability to activate the innate immune system, enabling the body to produce several proteins (defensin and cathelicidin), which, by initiating cellular activity, inhibit viruses.

According to Dr. John Oxford, professor of virology at Queen Mary School of Medicine, London: “This is a timely study. It will be noticed by scientists. It fits in with the seasonal pattern of flu. There is an increasing background of solid science that makes the vitamin D story credible.”

The mechanism behind the ability of vitamin D3 has recently been refined by researchers. According to them, it improves the immune system, which makes it crucial for human health.

Vitamin D is a precursor to steroid hormones, which has potent effects on innate immunity.

Since the amount of vitamin D in most foods and almost all multivitamins is literally unobtrusive, additional doses should be taken.

Scientists have found that the correct daily dose of vitamin D for adults is approximately 5,000 IU.

When you want to determine your vitamin D adequacy, take the 25-hydroxy-vitamin D test, not the 1,25-di-hydroxyvitamin D test many doctors now recommend.

Immunologists have found that a healthy level of vitamin D in the blood is between 70 and 90 ng / ml, a level that currently has less than 5% of Americans.

In winter, when the days are shorter, all people feel sick. All of these studies confirm the connection between Vitamin D and the human immune system, so it is imperative to reach these levels for maximum benefit.