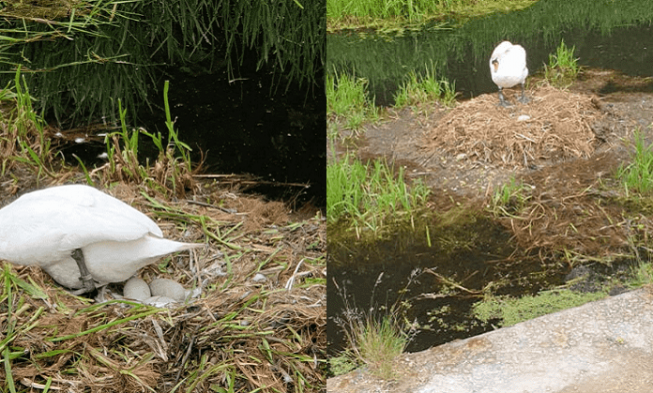 One man named Michael James Mason from Manchester reported a very sad story on a Facebook group on June 18. A heartbroken swan at the Manchester park passed away after vandals destroyed most of her six eggs before they hatched. Additionally, her mate ran away. Michael is also a wildlife enthusiast who monitored the swan. The public was shocked at the news and expressed their anger with comments. They were following the swan’s story through posts shared by Michael updating their situation on the Facebook group.

The swan had to deal with the vandals and with dogs harassing her constantly. Additionally, a moorhen and duck also made her life miserable. From these incidents, she lost all but one of her eggs. Her mate also left her and she was left on her own. After so many hardships experiencing in a small period, she was found dead in her nest. Mason was feeling down after finding out, especially since he followed her progress for 12 weeks. An investigation is being carried out by the Prevention of Cruelty to Animals hoping to find the vandals. The eggs are protected by the Wildlife and Countryside Act 1981.

Swan whose nest was smashed up by vandals with bricks 'dies from a broken heart'https://t.co/s5fpZujJ5D

Wildlife activists are condemning the incident and want the group of teens caught. The swan’s nest was located at the Manchester Canal in Kearsley where the teens threw bricks. Witnesses were able to see the teens aiming for the nest.

Swan 'dies from a broken heart' after teenagers destroy nest and eggs https://t.co/k6Lh5LimYH

One rescue center for swans called The Swan Lifeline claimed that there were cases of dead swans found after they experienced a broken heart after losing their partners. Swans typically mate for life. On June 8, another incident came to light after an elderly jogger kicked a young cygnet in Richmond Park in south-west London. The Metropolitan police are hunting for the man that left the bird with brain damage. Sadly, the bird died two days after being brought to a sanctuary in Shepperton, Surrey.

Police hunt jogger who kicked cygnet out of his way in Richmond Park https://t.co/s4RFVCAQEQ

Swans are part of the subfamily Anserinae and are classified in the genus Cygnus. With their long necks, white-feathered body (they are also black ones), and big feet, they are one of the most majestic animals that can swim and fly with slow wingbeats. From seven or eight species (some might be subraces), five are all white with black legs of the Northern Hemisphere. The South Hemisphere has the other three species, one black, and two pink-legged forms. On great heights, they migrate in a V-formation.

Typically, swans are very sociable animals except during breeding season. As mentioned above, these animals mate for life with the same partner.