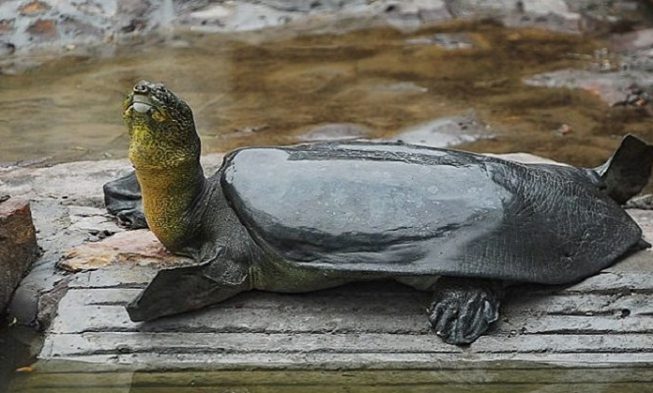 In China’s Suzhou Shangfangshan Forest Zoo, the world’s last known female Yangtze giant softshell turtle passed away. She died after trying to artificially inseminate her, and unfortunately, only three individuals of the species are left on Earth.

In 2008 the female traveled more than 1,000 kilometers (600 miles) from Changsha Zoo to Suzhou Zoo, hoping she would like to cohabit and bring offspring with another turtle- the 100-year-old male turtle that was living at Suzhou.

However, they couldn’t produce offspring naturally. After many attempts at artificial insemination, the female couldn’t get pregnant.

While recovering from anesthesia after the fifth try at artificial insemination, the female died and the male rehabilitated from the procedure.

A few years ago only four known Yangtze giant softshell turtles in the world existed. The last known female of this kind passed away in China on April 13. According to local media, the female died after an attempt to artificially inseminate her when she was 90 years old.

So sad, we should take a moment to reflect. The very last female Yangtze giant softshell turtle on Earth died. Yet another species that is doomed to extinction. While we're all eulogising
about Notre Dame, this has gone almost unnoticed. This cannot be rebuilt people😭😭 pic.twitter.com/a2haxJhgig

There are only three known Yangtze giant softshell turtles: an old male living in Suzhou Zoo, a wild turtle in Vietnam’s Xuan Khanh Lake that was identified recently, and a wild individual in Vietnam’s Dong Mo Lake.

Chinese zoos together with experts from international conservation groups, such as the Wildlife Conservation Society (WCS) and the Turtle Survival Alliance (TSA) are trying to take care of this very rare turtle species.

Experts were desperately trying to inseminate the female turtle for several years, but none of her eggs hatched.

While mourning artifacts and architecture we forget to mourn those that humans themselves have caused the destruction of. Destruction of habitat and hunting decimated the yangtze soft shell turtle population. And now the only female has passed away. There's only 3 left. pic.twitter.com/np1uGRW9F9

A female Yangtze giant softshell turtle, believed to be more than 90 years old, died in a zoo in China, leaving behind just three known members of the species. pic.twitter.com/U8JJ6yoJRh

“The male and female turtles, which have failed to produce offspring naturally since they were brought together in 2008, were determined to be healthy for the procedure, and similar anesthesia procedures had previously been performed without incident. Sadly, this time the female turtle did not recover normally as she had in the past and she died despite 24 hours of nonstop emergency care. A necropsy will be performed and ovarian tissue has been frozen for potential future work.”

The Yangtze giant softshell turtle was well-known from the Red River in China and Vietnam and from China’s lower Yangtze River floodplain as one of the most endangered species. Extinction is treating them as a result of river damaging, the loss of wetland habitats and hunting for meat and eggs.

Somewhere in the world, there can be a few undiscovered individuals.

“The species is very secretive and the lakes and large rivers that they are found in [are] large and complex. If you see how difficult it is to observe these animals, even when you know they are in a relatively small area then you’ll understand how hard they will be [to] find.”

Research workers are trying their best to discover more individuals from this mysterious and endangered species.