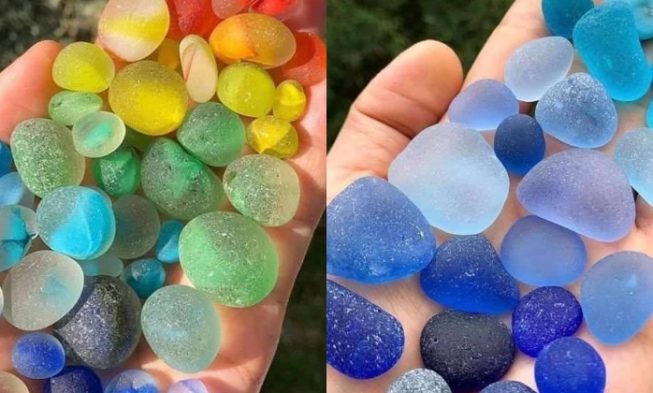 Almost all of the glass that humans have used and thrown away has ended up in the ocean (if it wasn’t recycled). Even though this sounds bad for polluting the ocean, it’s much less worrisome than other polluters such as plastic. Glass is made out of natural material, sand, and it turned back into the sand after it erodes into tiny pieces.

However, before the glass breaks down into the tiny sand, it is plunged over in the ocean into small stones called sea glass. There are entire beaches filled with sea glass located in Scotland, the Isle of Man, Mexico, northern England, Hawaii, Italy, Australia, Nova Scotia, Puerto Rico, Bermuda, the United States, and southern Spain.

Typically, this sea glass is created from the glass from broken bottles, broken tableware, or shipwrecks. These shards of glass are later rolled with the tides of the ocean for many decades until they lose the sharpness.

The result is a smooth and round piece of glass, just like any rock you’ll find on the beach. The shards also lose their slick surface and look like they’re frosted. This rolling process can sometimes last about 100 years.

History in the Glass Pieces

Many people started collecting these pieces of sea glass. Aside from collecting them, they can tell exactly what or when the glass originated with a simple observation – the color of the glass.

A big part of the sea glass that we find today is either white, clear, brown, or kelly green. These all come from modern glass bottles from beer, juice, or soft drinks, as well as plates, windshields, drinking glasses, and windows.

The previous colors are still more common than the purple, cobalt blue (poison bottles, Milk of Magnesia early, and Vicks VapoRub), and aqua (Ball Mason jars) colors. These colors account for one in every 200-1000 pieces of sea glass found.

The rarest sea glass colors that you can find are antique black glass originating from pirates’ liquor bottles in the Caribbean over 500 years ago.

How is Glass Made?

Many people don’t know that glass is made from liquid sand. The sand is mostly made of silicon dioxide and it’s heated until it reaches a liquid state.

However, an incredibly high temperature is needed to melt sand. To transform the sand into a liquid form, the temperatures need to be at least 1700°C (3090°F).

What’s interesting is that when the liquid sand cools, it doesn’t transform into the gritty yellow sand that we all know well. Instead, it undergoes a complete transformation with a completely different inner structure. No matter how much you cool the sand, it never solidifies.

Instead, it stays in a type of frozen liquid, otherwise known as amorphous solid. This is a cross between liquid and solid with some of the crystalline order of solid and molecular randomness of a liquid.