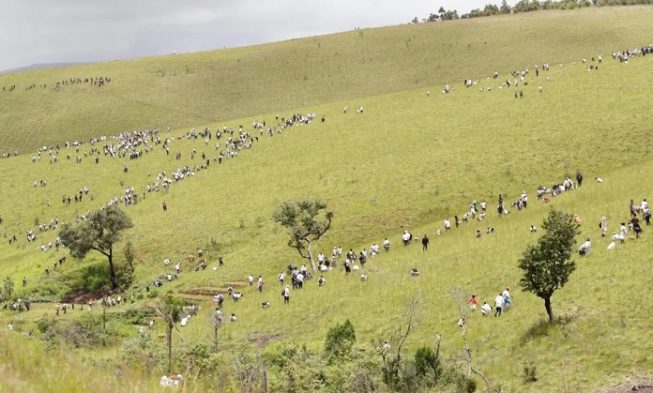 As one of the oldest islands in the world, the island was once filled with evergreen and deciduous forests. It contains large numbers of different species ranging from flora to fauna. Some of these species are native to the island and can’t be found anywhere else in the world. However, as time passed, more and more of the forests suffer from erosion or are cut off to make room for rice fields, getting building materials, and used for exporting valuable timber (rosewood, sandalwood, ebony). Almost one-fifth of the forest cover has been reduced mainly due to a shifting agricultural practice of the natives (tavy).

The deforestation of larger areas can lead to many different problems such as soil erosion, desertification, climate change, flooding, etc. This is why it’s so important for forests to be kept in good numbers and not completely removed from the ground.

A great initiative was pushed by the president of Madagascar on its 60th Independence day. President Andry Rajoelina wants to rejuvenate the forests of Madagascar by planting millions of trees over 500 dedicated hectares of land. Additionally, he motivated his citizens to participate in the cause which resulted in about 1 million trees being planted in the span of a few hours. Aside from the citizens and government institutions, the initiative was also followed by ministries, schools, offices, non-government organizations, and army personnel.

Experts claim that the real problem is keeping the newly planted trees safe. The Ministry created rules which will keep the trees safe by not permitting the fruits inside the protected area to not be consumed. Additionally, these trees won’t be cut down for charcoal or lumber.

As a start to the initiative, more than 5 tons of seed balls were dropped from an aircraft in this protected land. These seed balls contain soil with 25 seeds each which will help plant the trees easier instead of doing manual work. If using the aircraft to plant the trees works well, the government of Madagascar will keep using airplanes and drones to reach the remote areas for planting the seeds. As of now, about 60% success rate for the germination of the seeds has been seen which is reassuring for the country. The president of Madagascar hopes that in future generations, Madagascar’s forests will be an amazing gift to the entire Earth.