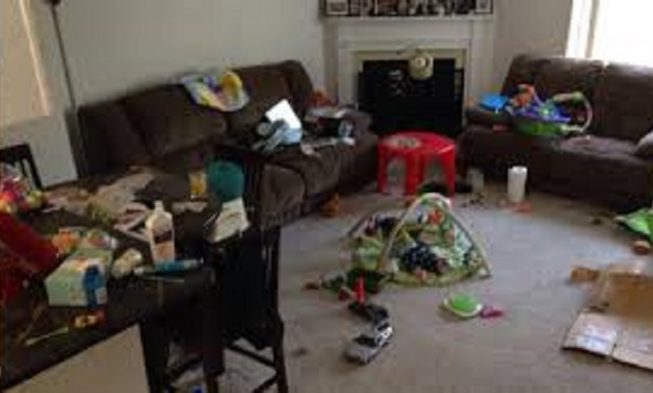 Clutter means a confused disordered jumble of things, which can be a condition (lifestyle) how some people live.

Those people can work great in chaotic and messy environments, while others need things to be meticulous and precise in order to function properly.

According to some research, the clutter plays important role in the people’s mental well-being, more prominent than everyone might think.

The UCLA’s Center on Everyday Lives and Families conducted a study, which showed that the link between clutter, stress, and anxiety is chemical.

The women who participated in this study and lived in cluttered homes had higher levels of the stress hormone cortisol than average women.

The Princeton University conducted another study and found that working in a physically cluttered environment negatively affects the ability of the people to focus and process information. This condition actually leads to stress.

Examining this subject the scientists and the psychologists also found that clutter can be a great source of anxiety for some people. For example, the psychologist Sherrie Bourg Carter, who writes for Psychology Today states that a messy home and/or work environment can lead to more stress.

Sherrie recognized 8 main components, which contribute to causing so much stress.

The clutter causes an abundance of stimuli from the external world, which are caused by the sight, touch, sound, taste or smell.

Because of the clutter, the attention of the people is no longer focusing on their goals or task, as they are focused on it.

The clutter and the mess cause that the people’s brains think about unfinished jobs around them in reality.

Causing anxiety in some people they don’t know exactly where things are and they are unsure about the things are done.

For the people who need an organized and clean workspace or home, seeing clutter can cause feelings of embarrassment or guilt.

Sherrie says that a lack of open space prevents creativity and productivity. The open space is necessary for thinking, problem-solving, and brainstorming.

The people can get agitated when they can’t find what they need to amidst the mess and clutter.

Besides the symptoms of anxiety with clutter Sherrie offered also suggestions to declutter and also de-stress.

Here are the suggestions:

1) Tackle de-cluttering as a family

In the case a clutter has invaded the entire house, it shouldn’t be the responsibility of one person.

The whole family should be involved by starting with a room everyone uses and making each person responsible for a unit.

For those who are alone, they should start with one area at a time and finish de-cluttering that area before moving on to another. The successes little by little will act encouraging.

The people can easily find what they’re looking for when they need it.

Make these designated spaces “closed” spaces, such as drawers and cabinets, do not keep them in open space.

3) If the things aren’t used, aren’t wanted or needed, then the suggestion is to get rid of them

There is the possibility to toss things, recycle or donate them, but the worst solution is to keep them. Rarely used things should be stored in a box somewhere in the house.

However, if the box hasn’t opened in a year, whatever is inside is probably not something people need.

4) When something is taken out of its designated space to use it, the best suggestion is to put it back immediately after the use.

A pending folder helps the people to clear off their workspace while at the same time provides them with a readily accessible folder to easily locate and to centralize pending projects.

When it comes to stressful clutter, the random papers strewn everywhere can be Public Enemy No1.

The key is to be conscious of what the people bring and what others bring into their spaces. It is highly recommended to go through these papers as soon as possible, and toss what is not needed and to store what is necessary for its proper place.

7) De-cluttering the primary workspace before leaving it

Pulling things out while working in a space is normal, but making a habit of cleaning off the workspace before leaving it is very helpful.

This habit gives the people a sense of closure after leaving and also makes them feel good when they return to a nice, clean space.

Making it fun will make the people enjoy.