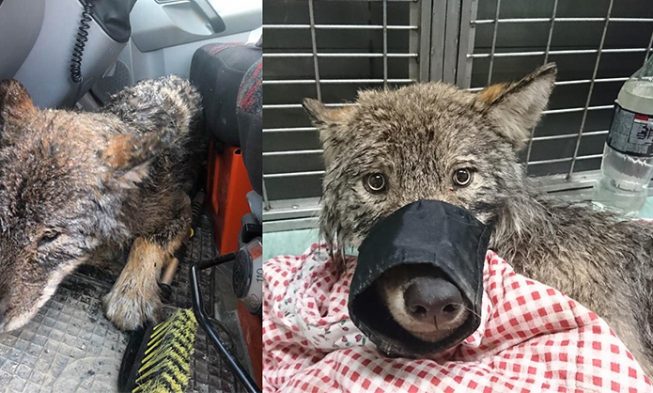 Estonian workers managed to rescue a dog, or at least they thought it was a dog, from the freezing water of the Parnu River. The event took place near the defunct Sindi dam, on the Parnu River.

These workers noticed that there was a dog, struggling with the ice in the freezing water of the river. Obviously he was trapped and unable to help himself. Then the workers unselfishly rushed to help the dog get out of there.

Once they helped the dog clean a path through the ice and get to land safely, they took it to a clinic for further medical care. When the dog made it to the clinic, they learned that it was actually a wolf.

The three workers speaking about their experience

The three workers, Rando Kartsepp, Robin Sillamäe, and Erki Väli, spoke about their unusual experience when they revealed some details about the event.

They said that it was swimming on its own, and it was freakishly strong. When they finally reached it, they noticed that it weighted more than they’ve expected. While they were transferring it to the clinic, it was really calm, sitting under the blanket the workers covered him with.

Experts’ opinion on this unusual event

Many experts believe that the wolf was so calm due to his low blood pressure. That is why the workers did not doubt for even a moment whether they rescued something else than a dog.

Anyways, thanks to all the people included, the wolf had a full recovery and was let to go back into the wild, just one day after this terrible accident. However, before they freed the wolf, the researchers put a GPS collar so that they could make sure he was fully recovered with no consequences whatsoever.

People from the EUPA claimed to be really happy because of the successful ending of this story. They expressed their thankfulness towards the workers who saved him in the first place, and then towards all the people who participated in the recovery activities.

Since Estonia is home of hundreds of wolves, this event was of great importance for them. Especially because it made a contact with humans, which is kind of rare occurrence since they usually avoid humans.