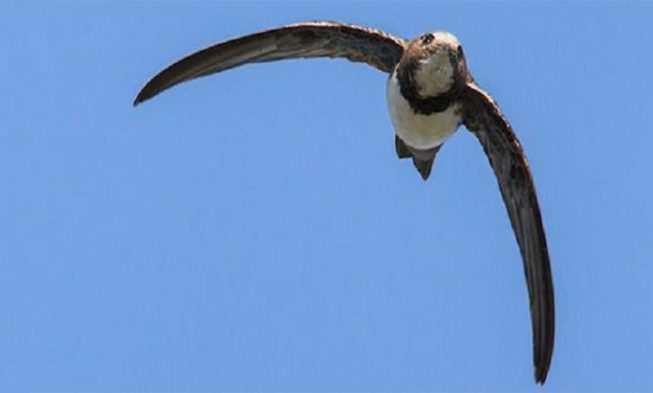 Felix Lietchi along with his colleagues at the Swiss Ornithological Institute attached electronic tags that collected data on movements to six alpine swifts in 2011. These small birds weigh a quarter of a pound or less. During the summer days, the small birds stay in Europe breeding. After that, they migrate to Africa thousands of miles away for the winter days.

Felix wanted to collect data about the energy demands during their migration. From this data, they anticipated “to see how often they fly, how often they stop, that sort of thing.”

A year later, three of these birds returned to the same breeding site. The scientists removed the tags from them to see what the data indicated. What they found out from the data was completely unexpected. Felix claimed that the data blew all of his team away. Throughout the period migrating to Africa, the data showed that the birds were in the air always.

The team’s study was published on October 3, 2013, on Nature Communications. The study showed that the birds were flying 200 days straight in the air over West Africa. However, because the tags only recorded the data every four minutes, there may be a chance they occasionally came to the ground between the intervals. However, out of all the recorded data for six months, not a single time did the data record a time where they were below the height of flying or gliding in the air.

Previously, ornithologists were speculating that the common swift (closely related to the alpine swift) can stay in flight for long periods. However, this was the first time that recorded evidence of it existed. This was all accomplished thanks to the new developments in technology. Before 2011, that kind of a sensor hadn’t been developed. The sensor was later developed by engineers at Bern University and the same ones were attacked on the birds for research purposes.

Because of the small size of the sensor, researchers were able to attack it to even smaller birds without any interference with their day to day movements. All the tags did was collect data on acceleration, the angle of the birds’ body relative to the ground, and the light shining on the bird at the time of collecting data. By collecting the data of the shining light, scientists were able to calculate the latitude of the bird because of the timestamp of the data. They compared the time stamp with the location of the bird and timed the sunrise and sunset.

Felix and his team compared the acceleration and pitch data to birds under observation and match the data sets and patterns with different movements. These movements consisted of flying or flapping the wings, gliding in the air without moving their wings, or resting on the ground. Felix claimed that the recorded birds “stayed in the air for all time they spent south of the Sahara, day and night. Sometimes they just glide for a few minutes, so there’s no movement, but the pitch of the body indicates that they’re still gliding in the air.”

The biggest mystery about it is how the birds are psychologically able to do this. The scientists were able to understand the diet aspect because the birds can feed on airborne insects. However, the question if birds can sleep in the air wasn’t proven until then. Fundamentally, sleep patterns for birds are much different than in mammals. Additionally, it’s hard to study the brainwaves of migrating birds and figure out how they rest while they’re in motion. However, scientists are positive that these birds can do it because of the data collected.

The confusing part of this question is why the birds would choose flying continuously for the entire trip to Africa rather than rest for some time on the ground. Even though it’s just speculation, Felix suggested that a big role for the answer to that question is the birds’ diet. By observation, the more north the birds went “the more they stay on the ground at night. Additionally, the further north you go, the less insects there are in the air—so it might be related.” Felix also added that when the birds stay in the air, there is less risk of being attacked by a predator or catch a disease.

The most thrilling fact is that this new piece of equipment, the ultra-lightweight movement sensor, was able to help the team of scientists for avian research. It’s much easier now to tag all kinds of birds compared to back then when the conventional sensors were too big for smaller birds.
Sources: