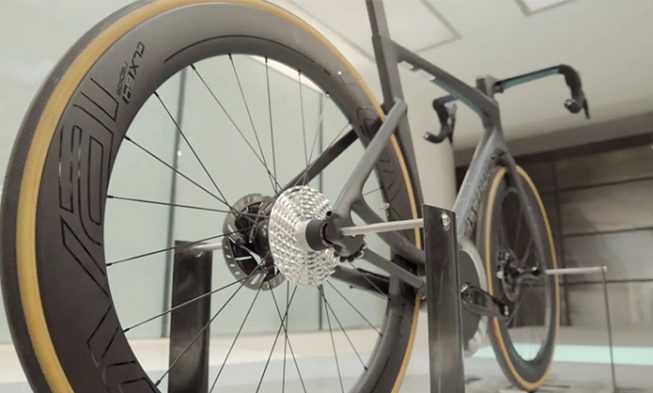 The 2018 edition of EuroBike has introduced one of its greatest invention, the chainless bike.

CeramicSpeed stands behind this amazing prototype which currently required a special frame. This is a revolutionary drive concept that is aiming at setting a new standard in efficiency. This prototype is replacing the need for derailleurs and chains with a pinion-style driveshaft system.

People are getting pretty excited about this chainless bike because breaking the chain is the nightmare of anyone who rides a bike.

We all know that the chain is basically the heart of every bike, because without it, the transmission to the wheels of the power impressed on the pedals will be impossible. And when it’s about to be fixed, it’ a really delicate, time-consuming work that requires a good dose of patience.

Therefore, the Danish startup CeramicSpeed together with the Department of Mechanical Engineering of the University of Colorado, has launched the “Driven”, which is the first prototype of a chainless bicycle.

How will it work?

Instead of a chain, this bicycle has a bearing drive system that is very similar to that of roller skates. Riding this bicycle is enabled by a super-light shaft equipped at each end with a series of ceramic bearings.

The shaft is attached to the front toothed wheel and on the rear, on a system of thirteen gears, arranged on a flat surface. Thus, the classic sprockets on traditional bikes are replaced. When compared to the best chain and derailleur system there is on the market, the test showed that with the chainless bike there is a reduction on friction of 49%.

The only drawback regarding the bicycle is the price. Currently, the cheapest chainless bicycle is about $2000. So not everyone can afford the luxury of possessing one such bike.

People’s reactions regarding the chainless bike

People’s reactions are all positive. Judging by the comments they left, they are super excited by the idea. Some of them are already coming up with certain suggestions about some adjustments that could be taken into consideration.

There are some who are truly hopeful that this new mechanism will work on mountain bikes as well. There are some others who are hoping for adapting it for the racing conditions. All in all, people seem to be really fond of this new type of a bicycle.