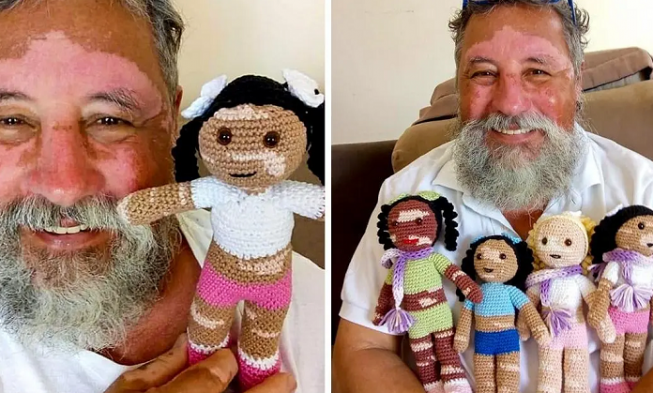 In the early ages of a child’s life, the grandparents are usually the ones that spoil them the most, especially the grandfathers. Grandfathers give happiness to the children and know exactly what the child is thinking because of their certain child-like quality that they have. Joao Stanganelli Jr., a 64-year-old grandfather from Brazil is the same. Joao suffers from a condition known as vitiligo and he has a sensitive side and clearly shows affection to children that also suffer from the condition.

This condition causes the skin to change color in spots, affecting any part of the body. The condition can also affect the person’s hair. This condition is not contagious and far from life-threatening. However, it can cause a lot of pain in the person’s self-esteem because the society that we live in gives too much importance to the appearance of someone. Children affected by this condition have it worst since they are rejected or picked on by their friends or classmates. This grandfather from Brazil wanted to do something about this kind of action.

This condition has been with Joao for over 30 years. Year by year, the spots are more and more visible. He retired due to an unrelated health issue and wanted to occupy himself with something to have his mind active. Together with his wife, they took up crocheting and started making their creations.

Once he found the rhythm, Joao became addicted to crocheting. He created his first doll for his granddaughter. He added a few patches onto the doll for her to reconnect to him. This doll is what inspired him to make more dolls with patches.

At first, he started making dolls with disabilities like dolls in wheelchairs, with alopecia on their bodies and with vitiligo patches. His creations are meant to inspire people and children to stop shunning and respect the disabled. Additionally, he hopes that children will start seeing it as something normal when conflicted with a special child.

His cause has gotten a lot of support and he started posting his creations on his Instagram and Facebook pages.

Joao believes that the patches are just another part of his body and feel comfortable with them. What grinds his gears are the character flaws that humans have and no one cares about them. People around the world are enjoying the work of Joao and write about the experiences that they’ve had with bullying, shunning or humiliation about one’s physical appearance. These creations made them feel grateful and are all praising this considerate grandpa.