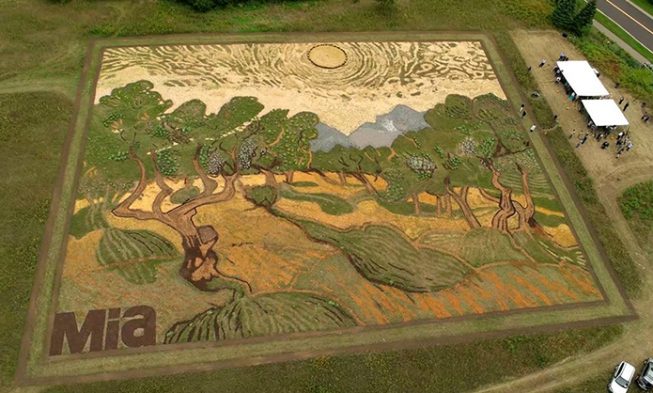 There’s been an attempt to bring art from inside museums into the outdoors. Thus, there’ve been many interesting such projects. However, Stan Herd is 67-years-old man who has been using fields as his canvas for many years now.

He has been creating his original compositions and interpretations of historical art on fields for quite a long time. This artist’s latest masterpiece is a monumental 1.2-acre interpretation of Van Gogh’s 1889 painting, called “Olive Trees”.

Herd planted his interpretation in Minneapolis. This masterpiece involved a lot of time in mowing, digging, planting and earthscaping as well. The point was to make it possible for people to see it from the air, near the Minneapolis airport.

The artist Herd specializes in “earthwork”. That’s a form of art, where artists work on fields and grounds and their final satisfaction happens when they succeed to transform them into works of art.

Herd has been into this since 1981, when he was about 20 years old. He says that when he started he knew that this kind of art seeks for creativity and hard work, but he was not aware of its social aspect.

Besides that, he had to work on his communication and logistics skills, raising funds and public relations as well. All those things came out to be very important when doing the “earthwork”. 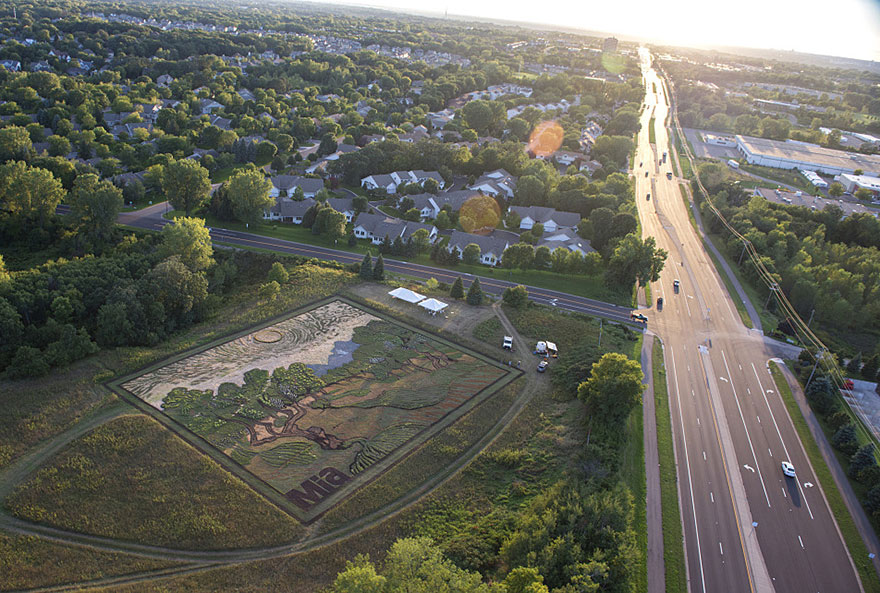 Herd’s first earthwork was a 160-acre portrait of Kiowa Indian chief Satanta. He carved it into a Kansas prairie in 1981. Ever since, he’s created many such works around the world and he served as an inspiration for Japanese artists in Inakadate province, which is near Tokyo. Those people got inspired to plant series of rice paddy artworks.

His latest artwork is pretty amazing and it spreads across 1.2 acres. It features an interpretation of Van Gogh’s “Olive Trees”. However, he says that this experience of his did not come easy at all.

He had to work on it for six months. He was taking care about every single detail of it. Furthermore, to make it look perfect he had to mow, dig and plant. It’s worth mentioning that his earthwork was funded by the Minneapolis Institute of Art.

The first thing he did, was to print out a picture of “Olive Trees”. And then, he could make a grid on top of it, so as to measure how it would be possible to create it on land.

When being interviewed by MPRNNews, he said that he felt like he had taken a little more than he could handle. He faced some problems like deer eating some of the plants, and some other plants were simply blown away. It was something he did not predict. Anyways, it’s good that he didn’t give up. He finished the job and gave us this wonderful piece of artwork that is a visual treat to the eyes.