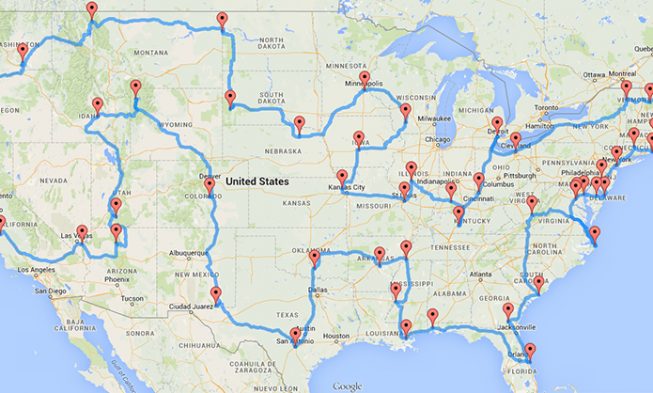 Randal Olson is a Portland-based data scientist. A Discovery News blogger, Tracy Staedter, asked him to use his experience and knowledge with algorithms and numbers to map out the ideal road trip through the United States.

She had several conditions though. First, the trip would need to stop in all of the 48 contiguous states. Also, all the stops should be at national parks, national landmarks, national monuments, or historic sites. And lastly, that car needs to remain in the US.

First, they needed to set up the landmarks.

All that they needed to do next was to figure out how to map out the route so that they would drive less and spend more time enjoying the landmarks.

The next move with the list of landmarks in hand was to find the “real” distance by car between all of the given landmarks. They wanted to find the shortest route between each landmark by car.

However, with 50 landmarks at their hand, in order to find the shortest road to take, they would have had to examine 3 x 1064 alternative routes exhaustively, which cannot be done within our lifetime.

After changing their algorithms and accepting the fact that they can’t possibly have the absolute best route, they settled for the next best thing. And it’s amazing.

However, there’s an extra stop in Cleveland because of the condition to stay within the US borders. They encourage all the people that can travel to Canada to by all means take the direct route instead.

This road trip would take about 224 hours (9 1/3 days) driving – and that’s if we assume that there would be no traffic whatsoever during the trip. This truly is a massive undertaking and it requires at least 2-3 months of your life to complete. But guaranteed, you will not regret it.